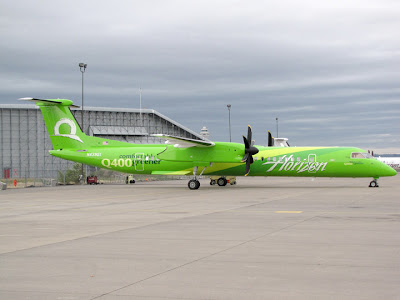 "At Horizon Air and its sister airline, Alaska Airlines, we're dedicated to reducing our impact on the environment," said Dan Russo, Horizon vice president of marketing and communications. "One major way we're doing that is by flying highly fuel-efficient aircraft."

The new Q400 is the first of two with the "Comfortably Greener" livery. The second will arrive in December.

In 2007, Horizon announced its intention to transition to a single fleet of Q400s, in large part because of the aircraft's greater fuel efficiency. Horizon is currently hoping to achieve a single-type fleet by the end of 2013. Presently, the airline operates 39 Q400s and 18 CRJ-700 regional jets.

The Q400 aircraft exceeds not only current environmental standards but also anticipated ones related to carbon dioxide (CO2), hydrocarbon, nitrous oxide and smoke emissions. All are well below the levels mandated by the International Civil Aviation Organization (ICAO).

For example, on a 500-nm or 575.4-mile trip, the Q400 aircraft emits 30 percent fewer emissions and rates among the lowest CO2-emitting aircraft on a per seat basis. Looked at another way, each Q400 aircraft produces 3,000 fewer tons of CO2 every year. Reductions are even higher on longer flights – up to 40 percent.

The Q400 is also known for producing less noise, a characteristic appreciated by the communities it flies over (in fact, the "Q" stands for "quiet"). The exterior noise level of the Q400 is 10 EPNdB (Exterior Perceived Noise in Decibels) lower than that of 70- to 80-seat jets.

Photos of the Comfortably Greener Q400 are available on the Image Gallery page of the Horizon Air Newsroom. Additionally, media are welcome to schedule their own photo or video shoot of the aircraft by contacting Horizon at 206-392-0296.

Horizon's new "Comfortably Greener" aircraft is only one representation of the environmental commitment the airline shares with Alaska Airlines.

This summer Alaska Airlines began testing next-generation flight procedures at Seattle-Tacoma International Airport (Sea-Tac) that will allow the airline and Horizon to reduce their environmental impact during airport approaches. Dubbed "Greener Skies," the project in cooperation with the Port of Seattle, The Boeing Company and the Federal Aviation Administration (FAA) is focused on using satellite-based flight guidance technology pioneered by Alaska Airlines to descend more efficiently and reduce aircraft fuel consumption, emissions and noise in the Puget Sound region. The airline is seeking FAA approval for the procedures, which could ultimately be used by all properly equipped carriers at Sea-Tac.

Posted by Michael Carter at 4:03 PM