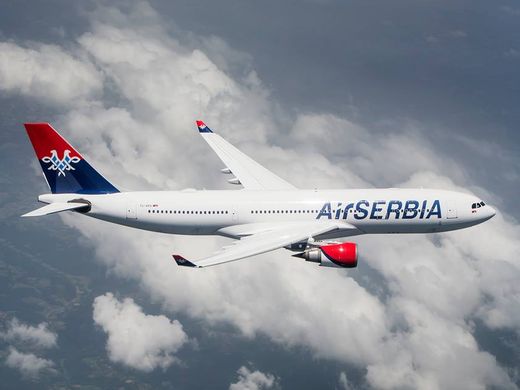 Air Serbia launched its inaugural flight to New York on Thursday, giving the Balkan nation of Serbia its first nonstop link on a local carrier to the United States in more than two decades.

The Belgrade (BEG/LYBE) to New York (JFK/KJFK) flight also marks Air Serbia’s first trans-Atlantic route. That in itself is a milestone development for the airline, Serbia’s new national carrier that sprouted from the demise of the old loss-making state-owned JAT Airways.

Air Serbia launched in 2013 after fast-growing Middle East carrier Etihad Airways acquired a 49% stake in then-ailing JAT. The company rebranded and began flying with some of JAT’s leftover assets.

Etihad, perhaps best known for its high-end service from its hub in Abu Dhabi, is managing the operations of Air Serbia for the airline’s first five years. The rebranding went beyond the carrier's name and logo, including everything from crew uniforms to customer-service expectations.

With that, Air Serbia became one of the latest in Etihad's growing list of strategic “equity airline partners." Air Berlin, Alitalia, Jet Airways and Virgin Australia are among those Etihad has invested in as it faces fierce competition from Gulf rivals Emirates of Dubai and Doha-based and Qatar Airways.

Air Serbia’s inaugural 2013 flight flew from Belgrade to Etihad’s hub in Abu Dhabi, though most of its early network focused on routes to Europe and the Mediterranean region.

Now, however, the service to New York puts Air Serbia squarely into the lucrative market for trans-Atlantic flights. The carrier is flying the route with 254-seat Airbus A330-202 aircraft with 18 lie-flat business-class seats and 236 in coach.

Air Serbia’s New York-Belgrade route also restores service predecessor Jat was forced to discontinue in 1992 amid conflicts during the breakup of the former Yugoslavia.

James Hogan, CEO of the Etihad Aviation Group and the vice chairman of Air Serbia, lauded both the launch of the new service and the cooperation of the Etihad group airlines.

“The Air Serbia touching down at John F Kennedy Airport is a vibrant, growing airline, one which represents the very best of modern Serbia,” Hogan wrote in an open letter in The National newspaper, based in the United Arab Emirates.

“The New York service is a perfect example of our cooperation,” Hogan added. “The Airbus A330 has been leased from Jet Airways; the pilots were trained by Alitalia; and the cabin crew were trained in Abu Dhabi. Together, the Etihad Airways family rallied around to help make this happen.”

While the new service is a step forward for Air Serbia and its Etihad Group partners, likely won't sit well with the three big U.S. carriers that have raised allegations of unfair subsidies for Etihad and Gulf rivals Qatar Airways and Emirates. Those Gulf carriers have steadfastly rejected those claims as false, but Delta, American and United have continued to press the U.S. government to freeze or restrict the Gulf carriers' access to the U.S. market.

Against that, Ben Sandilands of the Plane Talking blog sums it up by saying the new Air Serbia link adds to Etihad's "indirect interests in links across the ... lucrative North Atlantic... that aren’t available to it in its own right."

"It’s an example of the strategy that U.S. carriers see as a threat to their hold on routes where it had long been assumed traffic from second tier cities in former eastern bloc European cities would default to them either by new non-stop services or via aggregating hubs like London Heathrow, Frankfurt or Amsterdam," Sandilands adds in his Plane Talking blog.