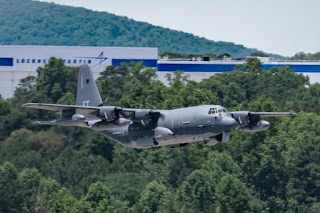 The HC-130J is the service's only dedicated fixed-wing personnel recovery platform and is flown by the U.S. Air Combat Command.

That aircraft is assigned to the U.S. Air Force Special Operations Command out of Cannon Air Force Base, N.M.

The C-130J has more than 1.2 million hours of flying combat, special operations, humanitarian, aerial refueling, firefighting and search and rescue missions under its belt, Lockheed said.

The airlifter can perform a variety of missions in austere environments.


(Geoff Ziezulewicz - UPI)
Posted by Michael Carter at 9:49 AM