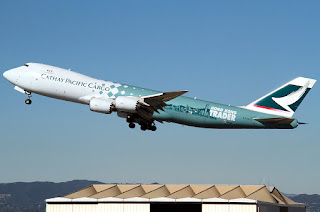 Boeing Co. is nearing a $4 billion deal with Russia’s largest air-freight company that would help extend the life of the iconic, hump-nosed 747 jumbo jet amid waning demand for four-engine aircraft, people close to the transaction said.

The U.S. planemaker is in advanced talks with AirBridgeCargo Airlines and its Moscow-based parent, Volga-Dnepr Group, to convert a year-old commitment into more than 10 firm orders for 747-8 freighters, two of the people said. The agreement could be announced as soon as the Farnborough Airshow next month in England, according to four people briefed on the deal, who asked not to be identified because the talks are confidential.

The deal would provide a crucial lifeline for the “Queen of the Skies” as Boeing tries to preserve production until the air-cargo market revives or shipping companies start to replace aging wide-body fleets. The 747 freighter, prized for a hinged nose that allows large cargo to be loaded at the front, is Boeing’s second-most expensive commercial jet, with a list price of $379.1 million. Buyers typically negotiate discounts.

Converting commitments to firm orders starts the process of allocating manufacturing resources and production slots to build the planes.

Boeing rose 2.6 percent to $133.13 at 9:37 a.m. in New York. The gain was the biggest in the Dow Jones Industrial Average, which climbed 1.4 percent in a global rally fueled by signs that the campaign to keep the U.K. in the Europe Union was gaining strength.

Sales have dwindled for Boeing’s four-engine 747 and the Airbus Group SE A380 superjumbo jetliner as airlines have shifted long-range travel to more-efficient twin-engine models like Boeing’s 777. Boeing had just 22 unfilled orders for the 747 through May, according to its website. The planemaker halved annual output of its largest commercial jet to six planes in January, citing declining sales.

The potential Russian savior for the 747 -- which brought long-range travel to the mass consumer market when it was introduced by Pan American World Airways in 1970 -- isn’t just a Boeing customer. Volga-Dnepr also transports large aircraft segments for Boeing’s 787 Dreamliner from suppliers to the planemaker’s factories.

At the Paris Air Show last June, Volga-Dnepr signed a memorandum of understanding to buy 20 of the 747-8 freighter. The shipping company took delivery in November of the first two aircraft, so-called white tails built for other customers whose orders fell through.

The Russian freight hauler confirmed it is the unidentified buyer for two of the four jumbo freighter orders Boeing recorded in March, saying the planes will be delivered later this year. The first of those two 747s has been repainted with the livery of CargoLogicAir Ltd., a Volga-Dnepr subsidiary.

(Julie Johnsson - Bloomberg Business)
Posted by Michael Carter at 10:49 AM