When did they put that building there? 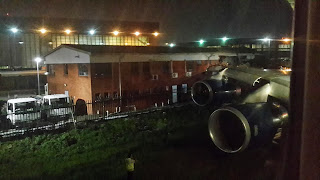 
The accident at Johannesburg's OR Tambo airport late Sunday night was caused by the plane using the wrong taxi way which was too narrow for the passenger jet, the South African Civil Aviation Authority said Monday.


Air traffic control had instructed the crew of the British Airways Boeing 747-400 departing for London to use a specific taxi way, said SACAA spokeswoman Phindiwe Gwebu in a statement. However, the plane traveled on a different taxi way that was narrower.


This resulted in the plane's wing clipping a building behind the SAA technical hangars, she said.


Four ground-handling staff in the building sustained minor injuries when they were hit by debris after the aircraft's wing struck the building.


"The 17 crew and 185 passengers who were in the aircraft escaped unharmed and were evacuated," said Gwebu.


She said there was fuel spillage, but that this was contained by the airport's fire services.


Investigators witnessed the recovery of the aircraft, and the removal of the flight recorder, she said.


The aircraft was moved to a remote location and airport operations had not been disrupted by the accident, she said.