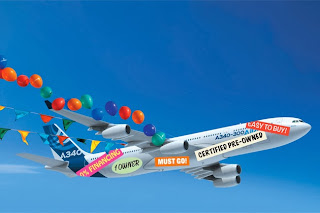 Two years ago, Airbus stopped manufacturing its A340 passenger jet, a four-engine wide-body suited to flying extra-long routes including Los Angeles to Singapore. While the production line is a memory, there’s one thing that can’t be forgotten: promises the aerospace giant made to many buyers that the jets would hold their value or it would make up the difference. Now, after watching prices of used A340s slide for years, Airbus is scrambling to persuade customers they didn’t buy a white elephant.

At a Dec. 4 meeting in London for airline and aircraft-leasing company representatives, the European plane-maker floated a plan to boost the seat count of existing A340s by 8 percent and lower maintenance expenses to improve the plane’s economics—and raise its resale value.

Demand for the A340, introduced in 1993, dried up as oil prices soared and aircraft makers introduced more energy-efficient two-engine models capable of flying transoceanic routes that once required four engines. Richard Branson’s Virgin Atlantic Airways, after launching the most recent version of the A340 in 2002 at a splashy London ceremony with supermodel Claudia Schiffer, quietly retired the plane last year.

Deutsche Lufthansa, which flies 48 A340s—more than any carrier—says the plane’s latest variant uses about 30 percent more fuel per passenger-mile flown than the two newer twin-engine wide-bodies that it has on order, Boeing’s 777X and Airbus’s A350.

That’s why, after spending an average $120 million for an A340 a few years ago, airlines and leasing companies today are reselling the same plane for about $20 million—“and only that if they’re lucky,” says Phil Seymour, president of IBA Group, a British aviation consulting firm. In September, International Lease Finance took a $1.1 billion write-down on its fleet of four-engine planes, which consists mainly of A340s.
More than bruised customer relations are at stake. Airbus sold many A340s with so-called asset value guarantees—basically pledges to compensate buyers if the resale value fell below a specified level.

Douglas Harned, an analyst at Bernstein Research, estimates that 40 percent of A340-500s and A340-600s, the newest versions of the plane, are covered by guarantees of $60 million to $70 million—at least three times the current market price. “Cash exposure from the asset value guarantees could be in the $1 billion to $2 billion range,” although Airbus may have insurance to offset some of that, Harned wrote in a Dec. 2 note to clients.

Often Airbus factors compensation payments into transactions in which customers trade in their A340s for newer planes. It arranged the resale of five A340s that Singapore Airlines had used on its recently ended non-stops to Los Angeles and Newark, N.J., while offering discounts on the Asian carrier’s order for the new, superefficient A350 wide-bodies made largely of carbon fiber.

Airbus contends the A340 makes commercial sense for airlines seeking to “grow their long-haul markets” and is “the VIP aircraft of choice” because of its spacious cabin and long-range capability, a company spokesman says. Some carriers, such as Norwegian Air Shuttle, have leased A340s while awaiting delivery of other planes or as a stopgap while grappling with technical problems on Boeing’s carbon-fiber 787 Dreamliner.
Potential buyers are scarce, though. Emerging-market airlines fly mainly shorter routes where narrow-body planes make more sense, and carriers with longer routes aren’t always able to fill the A340’s almost 350 seats. “There will be times, let’s say during the holiday season, when the economics will work,” IBA’s Seymour says. “But if at other times you’re only filling 50 percent of the aircraft, the fuel burn is so high that you’ll be losing money every time.”

Boeing’s four-engine 747 has been losing favor with airlines for the same reasons, and the U.S. aircraft maker has bought back the jumbo jet from customers. Of the 19 older 747s that changed hands in the first seven months of 2013, Boeing took seven, according to data compiled by Ascend Online Fleets.

That made it the single biggest buyer of used 747s during the period. It’s an unwelcome expense for Boeing, but at least the 747, which is still in production, has been flying since 1970 and booked more than 1,500 orders before its dotage. Demand for the A340 slowed within a decade of its launch, and only 377 were sold.

Another victim of the A340’s troubles is Rolls-Royce, which made the engines for the more recent versions of the plane. Engine manufacturers count on long-term maintenance contracts to make up for deep discounts they offer on engine sales for new aircraft. If the planes are resold too quickly or scrapped, Rolls may never get its money back.

Now it may ease the terms of long-term maintenance agreements, which could aid secondhand owners. Dominic Horwood, chief commercial officer for civil large engines at Rolls, attended the London A340 pep talk, along with John Leahy, Airbus’s top salesman. That’s evidence, analyst Harned says, that the situation “is being taken very seriously” by both companies.