Emirates - The reason for the big A380 purchase 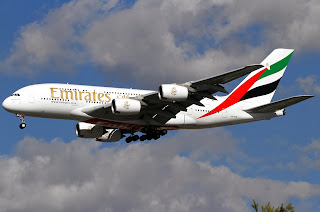 Emirates A380-861 (c/n 134) A6-EEM arrives at Los Angeles International Airport (LAX/KLAX) on December 5, 2013. The carrier upgraded it services to LAX with the A380 just three days earlier on December 2.
(Photo by Michael Carter)

Emirates Airline—which placed a huge order for Boeing 777X and Airbus A380 aircraft at the Dubai Air Show—wants to be ready for a “quantum leap” in air travel over the next 15 years.

According to an internal letter, the order was placed to position the carrier for a world civil airline market that will more than double by 2030.

ICAO predicts that while three billion people traveled by air in 2012, that figure will climb to more than six billion by 2030.

“We need to be prepared for the quantum leap in air travel,” the letter stated. “You also know that we are gearing up to receive 70 million passengers by 2020.”

Emirates’ order at Dubai was split between 150 777Xs (excluding 50 options) plus 50 A380s. The airline puts the value of the 777X order at around Dhs279 billion ($76 billion) at list prices, with the A380 deal worth a further Dhs84 billion. Combined, they formed the largest aircraft order in civil aviation history.

The letter noted that Emirates will be retiring around 50 aircraft in three years and the Dubai Air Show order will help replace those outgoing aircraft and increase fleet numbers. Delivery of the 777X is due to start in 2020, while delivery of 25 of the A380s will begin before the first quarter of 2018.

The letter stated the 777-8X variant “will potentially seat 342 passengers in three classes” while the 777-9X “will seat over 440 passengers in two classes.”

The new A380s will come in two- and three-class configurations. Internal seat numbers were not given.