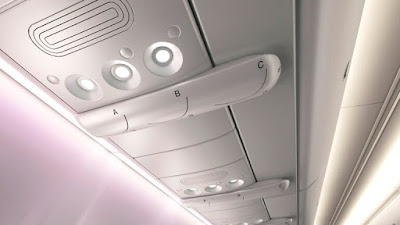 Teague’s AirShield is a single piece of plastic fitted over the existing overhead passenger airflow system. The air flows out through a thin, curved slot instead of a pinhole.

A leading Seattle design firm has unveiled a concept it claims will help stop the spread of the coronavirus in aircraft passenger cabins by redirecting the air that flows from above each seat to create an invisible barrier around each passenger.

As airlines struggle to restore confidence in the safety of air travel, the design firm Teague is heavily promoting its idea even though it remains an unproven and unapproved concept. “The AirShield concept is now entering its engineering development phase in anticipation of rapid deployment,” the company said in a statement.

In current airliners, the air that flows from the passenger unit above each passenger passes through a High Efficiency Particulate Air filter that removes 99.9% of airborne viruses and bacteria. That air stream, a mix of outside fresh air and recirculated air, forces the air breathed out by passengers downward toward the floor, and all the cabin air is recirculated every three minutes or so.

Both Boeing and airlines have argued this makes the risk of transmission low.

However, World Health Organization guidelines suggest that anyone seated within 2 meters (about 6 feet) of an airline passenger suspected after take-off of having COVID-19 should be kept under observation after landing until their risk is assessed.

The worldwide travel restrictions and lockdowns implemented to control the coronavirus pandemic have already devastated air travel. Airlines aren’t expecting an immediate resurgence in demand even as lockdown restrictions are eased.

One reason is the fear of virus transmission while traveling in a confined space, inhaling air potentially circulating around hundreds of other passengers.

Teague, which has worked with Boeing on its airplane passenger cabin interiors, has developed a concept to help address that fear.

It proposes attaching a piece of plastic to the overhead airflow unit so that the air flows out not through a small pinhole but from a thin, curved slot in the plastic.

Anthony Harcup, senior director of airline experience at Teague, who co-invented the concept, says the shaped downdraft of air will act as an invisible shield, forcing any air breathed out, even a sneeze, to fall to the floor before it moves outside a passenger’s seat area.

“By engineering the cabin airflow to manage each individual’s exhalations, passengers can have far greater peace of mind when seated nearby,” said Harcup.

The idea is comparable to the vertical “curtain of air” downdraft used at the entrance to many large grocery stores, casinos and other facilities to separate indoor air from the outside environment and to discourage insects from entering.

For airlines, this would be an inexpensive option because there’s no need to re-engineer the cabin. Teague’s device is a single piece of 3D-printed plastic that can potentially be snapped into place over the existing passenger air unit.

After the design is complete, the concept would still have to go through the required Federal Aviation Administration certification process.

If Teague’s idea is eventually certified to be deployed on aircraft, it would be one more in a range of safety measures that airlines have already rolled out to reassure passengers inside the cabin.

Alaska Airlines, for example, now requires all passengers to wear masks during a flight, is limiting inflight food and beverage service to reduce interaction between flight attendants and passengers, and is sanitizing the cabin with electrostatic sprayers that it claims will disinfect all the surfaces.

It’s too early to tell if these measures will be enough to convince most travelers that it’s safe to return to the air.