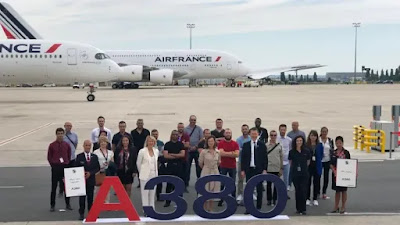 It’s always hard to say goodbye, especially when you know that it is for good. However, today (June 26, 2020) Air France says goodbye as it operates its final Airbus A380 flight on an aircraft less than ten years old. The French flag carrier becomes the first airline to scrap the gentle giant altogether.

October 30th, 2009, was a ‘giant’ day for Air France. The French flag carrier took delivery of its first Airbus A380. The airline went on to take 10 of the super-jumbos. However, after today, the A380 will no longer fly for Air France.

Air France picked a fitting flight number for its final Airbus A380 flight. Flight "AF380" was explicitly scheduled by the airline to say goodbye to the type. Much like an aircraft’s delivery flight, this exceptional trip was strictly by invite only. But how did you get an invite?

The flight was open to 500 members of staff, chosen from the pool of crew that had worked on the Airbus A380 during its time in service. After departure at 15:57, the aircraft climbed to 21,000 feet and flew roughly South from Paris until it reached Montpellier.

Unfortunately, the aircraft didn’t get to fly over its Toulouse birthplace. However, it did get to rendezvous with an undelivered Airbus A350 in Air France colors over the Gulf of Lyon. At the time of writing, the aircraft was flying back towards Paris for its final landing to mark the end of an era.

The retirement of Air France’s A380 aircraft didn’t come as a huge surprise. The airline had earmarked the entire fleet to be retired over the next couple of years. Indeed, it had already retired its first A380 before the pandemic.

While it is unfortunate that aircraft under ten years old are being retired, it makes sense for Air France from a financial point of view. According to the airline, retiring the A380 fleet immediately will set them back by a total of €500 million ($550 million). The airline will book this expense in the second quarter as a non-current cost/expense.

However, the alternate doesn’t make sense for the French flag carrier. Air France had earmarked the aircraft for retirement over the next couple of years. Meanwhile, IATA doesn’t believe that demand will return until 2023/24. This means that there is little to no chance these A380s will fly again before they were retired anyway. There is no point in paying to maintain something that won’t fly again.

While sad, this won’t be the end of the Airbus A380. Indeed, the largest operator, Emirates, said that the giant would return to the skies in its colors in mid-July.