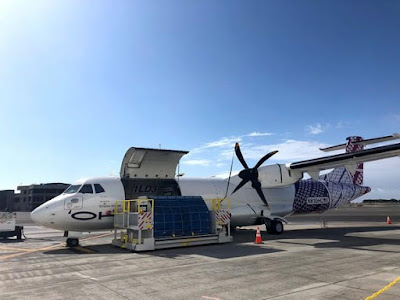 More than three years ago, Hawaiian Airlines announced plans to expand its cargo service between the islands of Hawaii, using a dedicated fleet of ATR-72 turboprop freighters. This new inter-island cargo operation was scheduled to begin in the first half of 2016.

By the end of 2015, the Hawaii-focused airline company had purchased three ATR-72s. Yet two years later, none of those aircraft had gone into service, due to a variety of delays.

Earlier this week, Hawaiian Holdings finally operated its first scheduled ATR-72 cargo flights. As Hawaiian builds out its inter-island cargo operation over the next year or two, its already successful cargo business should continue on its strong growth trajectory.

Hawaiian is starting with successful franchises

In 2010, Hawaiian Airlines' cargo revenue totaled less than $30 million. However, in that year, the carrier started to transition its long-haul fleet to the A330-200, an aircraft with ample cargo capacity. Hawaiian also began to expand rapidly in Asia in late 2010, allowing it to tap into the booming trans-Pacific cargo market.

As a result, cargo revenue surged to more than $70 million by 2014. After stagnating in 2015 and 2016, the cargo business returned to strong growth last year, with revenue rising 26% to nearly $90 million. That accounted for about 3.3% of the company's total revenue.

Hawaiian Airlines also has a dominant position in the inter-island air travel market. Since the late-2017 shutdown of Island Air, Hawaiian has had a near-monopoly within its home state, although it is set to face new competition from Southwest Airlines as soon as 2019.

Taking the next step

Hawaii's strategic position in the middle of the Pacific Ocean has been a key enabler of Hawaiian Airlines' success in the cargo market. Honolulu is roughly 5,000 miles from New York, Beijing, and Sydney. The U.S. West Coast, Japan, and New Zealand are even closer. Thus, aside from moving goods to and from Hawaii, Hawaiian Airlines has been able to capitalize on shipping demand between these three key regions (the U.S., East Asia, and Oceania).

However, most of Hawaiian's wide-body flights go in and out of Honolulu, which is on the island of Oahu. (This will become increasingly true as Airbus A321neos take over more flights to the outlying islands in the next few months.) Thus, while the carrier can move lots of cargo to, from, and through Honolulu, it has had less ability to get cargo to the other islands.

The ATR-72 freighters will be able to carry up to 18,000 pounds of cargo. Unlike the 717s, they can carry the LD3 containers that Hawaiian uses on its A330 wide-bodies. They can also carry bulky items. In short, dedicated cargo service will allow Hawaiian Holdings to serve a wider swath of the inter-island cargo market and seamlessly transfer shipments from the U.S. mainland and international markets to destinations in Hawaii other than Honolulu (and vice versa).

Starting small and growing from there

For now, Hawaiian Airlines will fly two nightly round-trip all-cargo flights, connecting Honolulu to Hilo (on the Big Island) and Lihue (on Kauai).

Hawaiian plans to expand the inter-island cargo operation next year after putting two more ATR-72 freighters into service, adding flights to Kona (also on the Big Island) and Kahului (on Maui). Depending on demand, it could also consider increasing the frequency of its cargo service on the two initial routes. Looking further ahead, Hawaiian Airlines will likely seek inter-island mail contracts when they next come up for bid.

Cargo will always account for a small proportion of Hawaiian Holdings' revenue. But launching the dedicated inter-island freighter flights should drive meaningful growth and higher profitability in that business, as Hawaiian now has a unique ability to efficiently move cargo to, from, within, and through Hawaii.

(Adam Levine-Weinberg - The Motley Fool)
Posted by Michael Carter at 8:17 AM