Does David Neeleman Have A Clear Flight Path For His New Airline?

David Neeleman probably would have preferred that word hadn’t leaked in June that he’s launching a new U.S. airline. Now the big carriers have time to plan how they’ll respond when it launches.

But the dynamic airline entrepreneur may not have actually tipped much of his hand yet, industry observers say, if at all.

According to an investor presentation seen by Airline Weekly, which broke the news of Neeleman’s plans, the founder of four other airlines, most notably jetBlue, is aiming to establish point-to-point routes in underserved secondary markets near major metro areas, with a provisional name of Moxy.

“Providence, outside Boston, features prominently as an example in Moxy’s presentation,” according to Airline Weekly. Other airports mentioned include Stewart airport an hour and half drive north of New York City, Baltimore, Phoenix-Mesa and in the greater L.A. area, Orange County, Ontario and Burbank. 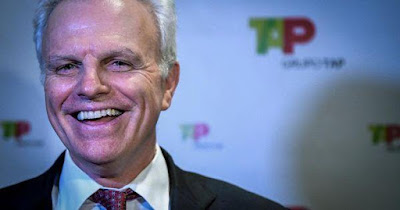 The message to existing airlines: that he’s trying to create new business rather than take theirs with what would be the first new U.S. carrier since Virgin America started flying in 2007. “That’s what everybody tries to say: I’m not stealing from the rice bowl, I’m bringing new rice,” says the airline consultant Robert Mann.

Doubling down on the leaking of his plans, Neeleman let Airbus announce a tentative deal to buy 60 A220-300 jets at the Farnborough Air Show earlier this month. Neeleman said in a statement that the fuel-efficient planes “will enable us to serve thinner routes in comfort without compromising cost, especially on longer-range missions.”

The planes, developed by Bombardier, could be key to his plans, offering impressive fuel consumption savings courtesy of efficient Pratt & Whitney geared turbofan engines and a lightweight aluminum and composite airframe, and a relatively spacious cabin with five-abreast seating, both of which dovetail with Neeleman’s reported goal of providing a better passenger experience at a reasonable price.

Their range could also abet plans Neeleman shared at Farnborough to knit his new airline into an international network with the carrier he co-owns in Europe, TAP Portugal, and his Brazilian startup Azul, allowing for service from the Northeast U.S. to the U.K., or Florida to Brazil, though it might make more sense to make the connection at U.S. airports.

“They have the potential to feed each other dramatically,” says Mann, but it won’t work unless Neeleman builds a strong network in the U.S.

Can he do that with nonstop routes connecting secondary markets? After years of consolidation, there are many markets that are underserved – Henry Harteveldt of Atmosphere Research Group points to former hubs abandoned by major carriers like Memphis, Cincinnati, Pittsburgh and St. Louis – but that’s not to say they’re unserved. “Many of them do have relatively easy access to big airports through regional airlines and the hub and spoke system,” Harteveldt says.

The competitive response could be ferocious on many point-to-point routes. Delta, United and American all have extensive fleets of regional aircraft with 50 to 76 seats that they could deploy on any routes where Neeleman establishes service (Delta and jetBlue also have A220s on order). Southwest, which only operates 737s, may find the planes are too large to be economic to respond with in some markets.

The incumbent airlines could also make moves at hubs close to any secondary airports that Moxy flies to — for example if Moxy establishes service at Stewart near New York City, JetBlue, Southwest or Frontier could lower fares or increase capacity at LaGuardia or JFK to reduce the attractiveness of the longer trek north.

Mapping out a route network that minimizes a competitive response will be key, but Harteveldt thinks Neeleman will need to establish hubs in at least a few major markets – that’s where the demand leads, and the efficiencies of the hub and spoke model generate better returns. That may mean trying to claw his way into the big, congested airports with shortages of gates and counter space.

“The people who do route planning for Moxy face a big challenge,” says Harteveldt. “It’s far more complex than it was for jetBlue 20 years ago.”

Along with the airline consolidation that has occurred over the past few decades, there’s also been investor consolidation, points out Mann, and the small club of private-equity funds and venture capital firms that invest in airlines are unlikely to support a startup that they think would truly hurt their existing positions.

In the best-case scenario, Neeleman's team truly finds a way to expand the market, perhaps beyond underserved geographies to other income brackets as well. According to Atmosphere Research, the average household income of travelers on American, United, Delta all top $105,000 a year, boosted by their first class and business passengers; jetBlue and Southwest passengers are at about $100,000. Budget airline travelers average $78,000, while the average household income in the U.S. is $55,000.

But given the likelihood that the established airlines will match or beat his fares on routes they compete, Moxy will have to differentiate itself in other ways — Neeleman’s old tricks like more legroom and free snacks won’t be enough, says Harteveldt. One way he thinks it could stand out is by crafting a better digital experience for customers to shop for and book flights, and offering travelers more flexibility.

First deliveries of planes are scheduled for 2021, according to the Airbus release. Mann estimates that the airline could start out with 15 to 20 planes serving a dozen cities, with at least four flights a day per market – the minimum for running a legitimate schedule for business travelers.

Given Neeleman’s track record, he shouldn’t have problems recruiting, however a growing pilot shortage could be a limiting factor. Having a brand-new plane with a good reputation will help, but the larger carriers can offer pilots the prospect of flying to a wider array of destinations, including overseas, and may be able to pay more.

Neeleman will likely have the bankroll to deal with tough competition out of the gate and any economic surprises, like the nosedive in air travel that the fledgling jetBlue weathered after 9-11 — “He’s always been careful to way overcapitalize his startups,” says Mann. And whether the leaked investor presentation gives a true sense of his plans or not, one benefit of the inherent flexibility of working with airplanes is that he can decide to change the game plan if market conditions look different two years from now.

What are his chances for success? Hard to say till we see the route network and more details about the value proposition. “You would never want to bet against David Neeleman," says Harteveldt. "What’s unclear is whether this is the time to bet with him.”