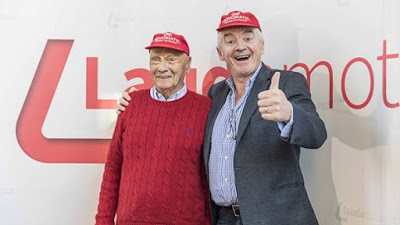 Starting June 1, LaudaMotion will have 21 aircraft in operation from nine bases in Austria, Switzerland and Germany, serving 44 airports on 65 routes.

Lufthansa confirmed to ATW that eight Airbus A320s, currently operating wet-lease flights for Eurowings through the end of May, will be transferred to LaudaMotion bases.

Ryanair has a 24.9% stake in Niki Lauda’s LaudaMotion, with a plan to grow ownership to 75%.

LaudaMotion currently operates 10 A320 family aircraft, which is planned to increase to 15 by June 1. Ryanair is wet leasing six Boeing 737-800s to LaudaMotion during the summer to make up 21 aircraft.

Lauda said he needs 21 aircraft to protect all its slots. The new carrier took 40,000 out of 60,000 slots at European airports, which became available following the takeover of bankrupt NIKI in January.

From June 1, four aircraft will be based in Vienna (Austria), four at Berlin Tegel, six in Dusseldorf and each one at Cologne, Frankfurt, Munich, Nurnberg and Stuttgart (Germany) and two aircraft in Zurich (Switzerland).

For the winter 2018/19 schedules, Laudamotion plans to launch so-called city-shuttle flights to European destinations (e.g., to Rome or Barcelona) and expand the Vienna-based fleet with three additional aircraft for a total of seven.

Ryanair CEO Michael O’Leary said the LCC is “happy to support LaudaMotion in its first summer schedule,” but added that LaudaMotion is not a Ryanair Austria.

LaudaMotion’s fleet should rise to 30 aircraft, but the number could rise to 40 in two to three years, according to Lauda.


(Kurt Hofmann - ATWOnline News)
Posted by Michael Carter at 8:55 AM