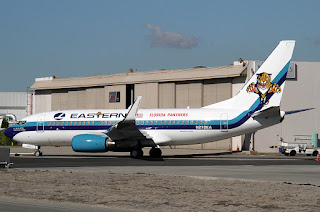 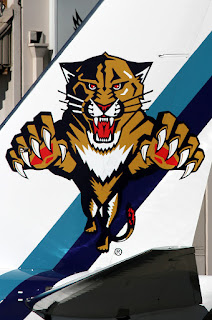 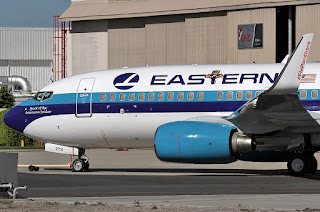 
What a sight to see as Eastern Airlines returns to Long Beach. Eastern Airlines was a frequent sight at Long Beach Airport (LGB/KLGB) in the 60's and 70's as numerous DC-8's and DC-9's were built here for the carrier. The current incarnation of the carrier operates two 737-800's and this -700.
This 737-7L9 was originally delivered to Maersk Air as OY-MRC and operated with the carrier her entire career until joining the Eastern Air Lines fleet this year.
The aircraft is currently being used to shuttle the Florida Panther's around the country and sports the markings of the team.
Posted by Michael Carter at 11:04 PM