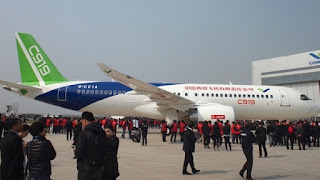 COMAC is aiming to fly the first C919 flight-test aircraft next year, but is avoiding any commitment on a first-delivery date.

C919 development began in 2008 with the first flight planned for 2016. COMAC had said in May 2014 that first delivery would be in 2018, but has since declined to update that outlook; the subject was not mentioned at the roll-out ceremony.

Executives close to the program say 2019 would be more likely and 2020 possible, but no one will be reasonably sure until well into flight testing.

COMAC chairman Jin Zhuanglong said the C919 will now undergo various tests in preparation for an inaugural flight in 2016, which will be followed by certification and delivery to Chengdu Airlines by 2020. The original schedule had the aircraft conducting its first flight in 2014.

COMAC has set targets of taking a third of the Chinese narrow-body market and a fifth of the global market by 2035.The manufacturer has committed to producing between 20 and 50 C919s annually and to increasing production capability to 150 C919s and 50 ARJ21 regional aircraft annually by 2020.

COMAC has done reasonably well in controlling the design weight of the C919, says an industry source close to the program. The type is overweight by more than 100 kg (220 lb.) but less than 1,000 kg, says that source. Offsetting savings in structural weight have been identified.

Structure supplier AVIC obviously met difficulty in building the first C919. Irregularities in panel fit and riveting are visible on the aircraft, which is not particularly surprising for a prototype.

Alignments that COMAC will need AVIC to improve are especially noticeable in areas of double curvature, which generally presents a greater challenge for fabrication than single curvature.

More remarkably, thick strips that look like reinforcing plates—doublers—are fastened to the underside of the wing roots with heavy, protruding rivets.

Such reinforcement, normally seen on old or damaged aircraft, means that the strength of the original structure is not trusted. Since the C919 prototype has a doubler on each side, the reason for this fix seems not to have been some one-off accident in fabrication of a part.

Earlier this year, progress in fitting out the prototype seemed slow, according to people who saw it then. With a roll-out due in 2015, industry officials wondered whether COMAC would repeat Boeing’s performance of July 2007.

The US company then presented the first 787 prototype to an unsuspecting world when the aircraft was not remotely ready for flight. It finally took to the air in December 2009.

As for the C919, sources close to the program were saying by this September that assembly was now going fairly well. There must have been slippages, but COMAC obviously preferred to reschedule rather than exaggerate its progress by presenting what merely looked like a finished aircraft.

Moreover, whatever the current condition of the first C919, it is unlikely to take to the air just for the sake of showing that it can fly. To the considerable satisfaction of program managers, Jin told them in 2013 that there was little point in test flying a test aircraft that did not closely represent the production standard.

Three main objectives have always driven the C919 program. One is a belief, common in Asia and especially China, that a government can advance the economy by choosing and backing supposedly strategic industries.

A second, also a Chinese preoccupation, is replacing imports. Civil Aviation Administration of China (CAAC) chief Li Jiaxiang emphasized that point at the roll-out ceremony, noting that, among of 2,625 civil transport aircraft in China, only 23, all AVIC MA60 and MA600 turboprops, had been built in China. And this for a country with the world’s second-largest air transportation market, he added.

“The air transportation industry of China cannot rely completely on imports,” Li said. “A great nation must have its own large commercial aircraft.”

A third factor is the domestic propaganda value of making aircraft, which was much in evidence in heavy media coverage of the roll-out ceremony, notably live broadcasting by China Central Television.