Appears to be the Omega Air Tanker.......very sad! Thankfully the crew made it out of the aircraft alive with minor injuries. 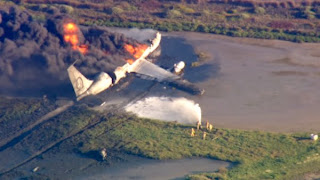 (KABC Channel 7 News)
A Boeing 707 military tanker plane with three people onboard crashed and burst into flames at the Point Mugu naval air base in Ventura County on Wednesday, fire officials said. The three passengers escaped with minor injuries.
Large plumes of black smoke could be seen rising from the aircraft on the beach near the Point Mugu Naval Air Station, located about 40 miles northwest of Los Angeles.
The plane is reportedly a Boeing 707 plane, which is considered an older model. It crashed and slid off a runway just before 5:30 p.m. Skid marks indicate the plane slid off the runway as it attempted to take off.


The naval air base issued a flight-restricted-area designation, requiring any aircraft to maintain a distance of at least 5 miles.


About 150,000 pounds of jet fuel was reportedly onboard when the plane crashed. It is not clear if any fuel had gone into the ocean.


Several firefighting agencies were summoned to extinguish the flames from the ground and air. A helicopter dumped several loads of water on the tanker. Firefighters on the ground appeared to be letting the fire burn but were dousing the area around the plane.


There is a possibility of a hazardous-material situation. The smoke and fuel can be toxic. People in the area were warned to stay indoors and away from the smoke.

According to an air station spokeswoman, the tanker is used for fleet operations support and transporting fuel. It is not known where the tanker was headed at the time of the crash.
(KABC Channel 7 News Los Angeles)
Posted by Michael Carter at 9:13 PM

my name is Mrs Joy i quickly want to use this medium to shear a testimony on how God directed me to a Legit and real loan lender who have transformed my life from grass to grace, from being poor to a rich woman who can now boast of a healthy and wealthy life without stress or financial difficulties. After so many months of trying to get a loan on the internet and was scammed the sum of $3,700 i became so desperate in getting a loan from a legit loan lender online who will not add to my pains,then i decided to contact a friend of mine who recently got a loan online, we discussed about the issue and to our conclusion she told me about a man called Mr Razaq Azeez who is the CEO of Razaq Azeez Loan Firm So i applied for a loan sum of ($70,000.00) with low interest rate so the loan was approved easily without stress and all the preparations where made concerning the loan transfer and in less than two(2) days the loan was deposited into my bank so i advice any one i need of a loan to quickly contact him via: (razaqazeezloanfirm@outlook.com) he does not know am doing this i pray that God will bless him for the good thing he has done in my life.

I am Mr.Doro Smith loans Service Lender, we are a legit, registered and guaranteed loan company and we give out loans to individuals, companies, government establishments, churches and business organizations and people of all sorts. Are you in need of a loan for any purpose? Are you in a financial problem? Do you need financial solution?.Doro Smith loans Service is the solution to all your financial problems, our loans are easy, cheap, and quick. Contact us today for that loan that you desire, we can arrange any loan to suit your budget at only 3% interest rate. If interested, contact us immediately via email,(dorosmithloanfirm@outlook.com)