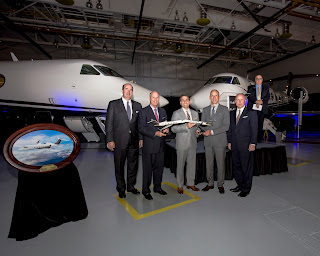 US fractional ownership company Flexjet has taken delivery of its first two Gulfstream G450s from an October 2014 order for up to 50 of the US airframer’s large cabin and ultra-long-range business jet family. The deal includes a firm order for 10 G450s, six G650s and six G500s.

The aircraft will carry the LXi suffix to reflect the customised interior, which is exclusive to all the new models in the Flexjet fleet.

The Directional Aviation Capital subsidiary is the only fractional provider adding new Gulfstream types to its operation. It will also be the only company within this niche to offer the top-of-the-range G650 and the in-development G500 when the duo are added to the Flexjet line-up in 2016 and 2018 respectively.

Rival NetJets is phasing out its 75-strong Gulfstream inventory. The types are being replaced by Bombardier’s Global 5000/6000/7000 and 8000 family.

“When we placed this order with Gulfstream, we wanted to make sure we would be able to offer these new aircraft to our owners in a timely manner,” says Flexjet chairman and DAC principal, Kenn Ricci. “The delivery commences [during] a period in which we will be the only fractional provider adding new Gulfstream aircraft to our fleet, making them available on an exclusive basis.”

Michael Silvestro, chief executive of the 20-year-old company, says the new aircraft are joining the fleet as demand for fractional ownership is on the rise. “Our fractional flying activity in the first quarter of 2015 was up 10% over 2014,” he says, “and we expect this growth to continue as we introduce these new aircraft”. Fractional sales in the first quarter climbed by 70% compared with the same period in 2014.

Flexjet has over 200 business jets on order, including aircraft from the Bombardier and Embraer stables.


(Kate Sarsfield - FlightGlobal)
Posted by Michael Carter at 12:53 AM