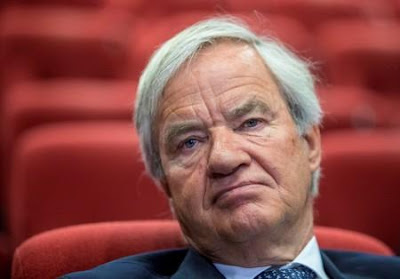 Norwegian Air's Bjoern Kjos stepped down on Thursday as chief executive of the airline he co-founded and turned into Europe's third-biggest budget carrier by passenger numbers.

The airline has shaken up the long-haul market with cut-price transatlantic fares, but its rapid expansion has left it with hefty losses and high debts and it had to raise 3 billion crowns ($350 million) from shareholders earlier this year.

"I am way overdue," Kjos, 72, laughing, told a news conference, announcing his plans to quit the top job. A former fighter pilot, Kjos helped to expand what was a tiny Norwegian airline housed in pre-fabricated barracks on the edge of Oslo airport.

He will have a new role as an adviser to the chairman.

"Bjorn has been the driving force behind the business – the big question now is whether Norwegian Air can maintain momentum as he takes a less active role," Bernstein said in a note to clients.

The jets have been grounded worldwide since March following two fatal crashes and Norwegian Air has said the disruption could scupper its plans to return to profitability this year.

The company reported second-quarter earnings that beat expectations on Thursday.

Its net profit came in at 82.8 million Norwegian crowns ($9.7 million), down from 300.3 million in the same period last year, but ahead of the average forecast of 76.2 million from five analysts compiled by Refinitiv.

The company cut its target for passenger carrying capacity growth to 0-5%, compared with the previous guidance for 5-10%.

It said earnings before interest, tax, depreciation and amortisation and restructuring or rent costs (EBITDAR), excluding "other" losses or gains for items such as foreign currency contracts and forward fuel contracts, were expected to reach 6–7 billion crowns in 2019, up from 3.2 billion in 2018.