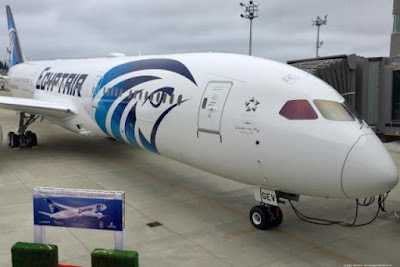 An EgyptAir 787-9 widebody jet is parked at a gate at Boeing's Everett delivery center, waiting for dignitaries and crew to take the aircraft a historic 13 hour flight home to Cairo, the longest ever powered in part by sustainable aviation biofuel.
(Anthony Bolante - PSBJ)

The EgyptAir 787-9 Dreamliner that took off from Boeing's Everett delivery center made history Tuesday when it embarked on the longest-ever commercial flight powered by biofuel.

Two EgyptAir captains shared the duties for the 13-hour flight, joined by a group of 50 people from Cairo, including the airline's two vice chairmen.

"It's a special flight because of the biofuel. It's history making and record-breaking," Capt. Abdelhady Mostafa Elshakankiry, who was at the controls, said in a pre-flight interview.

EgyptAir is leasing six Dreamliners long-term from AerCap, a Dublin-based company. Tuesday's delivery to Egypt's flagship airline was the fifth in as many months and the sixth will be handed over in August under a 2017 deal with Aercap, Boeing's biggest 787 Dreamliner customer.

The first flight of the new aircraft, bearing a "Clean to Fly" moniker on its fuselage, comes as jet makers and airlines around the world battle a growing chorus of criticism that global air travel causes greater emissions that are suspected of causing global warming.

Against that backdrop, Boeing is positioning its Dreamliner as the widebody jet of choice for airlines to help cut fuel use and emissions by up to 25 percent.

But the battle is far from over. France this month introduced legislation to tax flights to fund other forms of travel.

“Flying is freedom. Confining people’s horizons to train distances or boat speeds back-steps on a century of worldwide progress," he wrote. "Relying on virtual meetings to make global connections ignores the feelings and sensations that make us human.”

"Through these partnerships, we are able to demonstrate the viability of sustainable aviation fuels to the world," Remes said.

In January, Etihad Airways flew a jet to Amsterdam with a Boeing Drealiner 787-9 for 6.5 hours using fuel from plants grown in salt water.

Why your thoughts are so brilliant!? I really want what you're doing seems like you bring out the best in other people. Because lots of blog’s I’ve encountered was good but it doesn’t really encouraged people, for that I want to give you this dry cleaning service singapore maybe you find it helpful somehow.

Thank your for sharing nice blog. Maa Sherawali Packers and Movers is the best packers and movers in Patna. We provide best shifting services to All India at affordable rates. Call Now for top relocation services from Patna to All India.