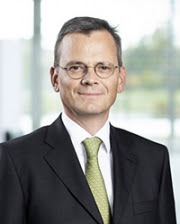 Airbus’ management transition continued Nov. 21 with the appointments of Dominik Asam as CFO and Michael Schoellhorn as COO of Airbus Commercial Aircraft. Both will also be members of the Airbus executive committee.

The appointments are for two of the last three key management positions that had yet to be filled as part of the manufacturer’s ongoing leadership reshuffle. Asam will replace Harald Wilhelm, who is leaving in April 2019. Schoellhorn follows Tom Williams, who is retiring at the end of the year.

Airbus is in the middle of a broad leadership transition. CEO Tom Enders will step down in April 2019 to be succeeded by Guillaume Faury, currently president of Airbus Commercial Aircraft. His predecessor, Fabrice Bregier, left in April after the board decided not to select him as new CEO. Former CCO John Leahy retired in February, and his successor, Eric Schulz, left in October. He was replaced by former ATR CEO Christian Scherer. EVP-Airbus Commercial Aircraft Didier Evrard is to retire soon.

Michael Schoellhorn’s appointment as COO of commercial aircraft (left) is an apparent indication that Faury does not plan to backfill his position as president of the unit when he becomes the group’s CEO. Appointing a COO would otherwise likely have had to wait until a new president was found. Schoellhorn will report directly to Faury.

In the fine-tuned balance of core nationalities in top management, Schoellhorn’s appointment, along with the naming of Asam as CFO, compensates the German side inside Airbus for the loss of the CEO position to a French national. Such balancing acts have officially been declared things of the past that have no influence on company decisions. However, keeping French and German control roughly equal is still an important informal factor. Faury has long experience working and living in Germany and speaks fluent German. Also of note as the UK prepares to leave the European Union is that Schoellhorn replaces Williams, the highest-ranking British executive.

Airbus chairman Denis Ranque earlier made clear that he will not seek re-election at the 2020 annual general assembly. Rene Obermann, the former CEO of Deutsche Telekom and an Airbus board member, is widely considered to be the top candidate for the position.

Asam joins Airbus from Infineon Technologies, where he has been CFO since 2011. He holds an MBA from INSEAD and a degree in mechanical engineering from the École Centrale Paris.

Schoellhorn has been COO of BSH Home Appliances since 2015. He served in the German armed forces as a helicopter pilot from 1984 to 1994.