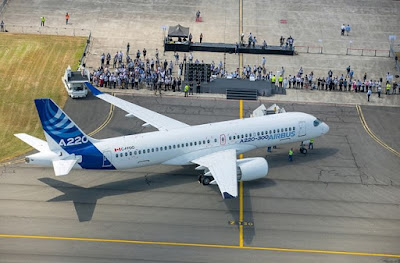 A220 reveal in front of Airbus employees and members of the global news media
(Image: Airbus)

Airbus has just re-branded the Bombardier C Series jet acquired in a recent deal with the Canadian plane maker as the A220 and has already set “double-digit” and even “triple-digit” sales targets for the A220-100 and A220-300 models, formerly known as CS100 and CS300. The rebranding seals the takeover of the loss-making Montreal-based aircraft program with Bombardier and Investissement Québec that came into effect on July 1, 2018.

Airbus revealed the A220 at a ceremony held at the company’s headquarters operation, Henri-Ziegler Delivery Centre, near Toulouse, France. The A220-300 landed directly from the painting at 12:25 am CEST, July 10, 2018, at the Toulouse-Blagnac Airport (TLS) wearing its new Airbus name and livery. The European plane maker has hailed the introduction of the A220 Family, the latest member of Airbus’ single-aisle jetliner product line, as a “historic moment” for the company.

“Today, we are thrilled to welcome the A220 to the Airbus family and are honored to see it wearing its new Airbus colors for the first time,” said Guillaume Faury, Airbus President Commercial Aircraft, also thanking the staff at Bombardier and the supply chain who have worked on the aircraft over the past years. “The A220 now enters a new phase in its career with all Airbus’ resources behind it," Faury stated in an official press release on July 10, 2018.

Airbus CEO Eric Schulz says his company is “enthusiastic” about selling the A220, considering its technology which should give the aircraft a decisive edge in a very competitive market. Shulz also expressed his “optimism” that Airbus will support to make the new A220 “a great commercial success."

In fact, Airbus has already set a target of at least 100 orders for the aircraft by the end of 2018 alone, as David Dufrenois, the program’s sales chief, was quoted saying at the unveiling ceremony in Toulouse by Bloomberg.

“I don’t think it will be very long before we see the first results on the market,” Airbus CEO was quoted as saying in a separate report by Reuters. Over the next 20 years, the European plane maker aims to reap a “triple-digit” level of sales of the jet. The company also expects a demand for a total of 7,000 jets in the A220 category over the same period, including Airbus‘ own A319.