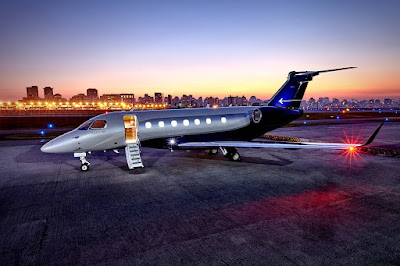 I tighten my three-point seatbelt aboard the new Embraer Legacy 500 on the ramp in Melbourne, Fla. Alvadi Serpa, Embraer’s manager of product strategy for executive jets, had just walked me around the $20 million business jet. He pointed out every detail that makes this eight-passenger, transcontinental midsize business jet a category killer, from the thoughtful placement of the hydraulic pumps to the single-point refueling port.

The Legacy’s Honeywell engines come up, the brakes snap loudly, and my back gets jammed into the cushy seat. We’re off the runway in less than 2,500 feet and climbing at a decidedly steep, nonstandard angle, up at 5,000 feet and 329 miles per hour in just over a minute. In 20 minutes, we’ll be at 45,000 feet, cruising at 460 knots en route to Key West. Yet with all this velocity, the roomy stand-up cabin is quiet, refined, and serene. You expect this from a large-cabin jet. But a midsize? No way.

It was 16 years ago that Embraer, the Brazilian builder of commuter-airline turboprops, formulated its strategy for getting into the business-jet market and taking share from Bombardier and Textron. It started modestly, but in 2006 it unveiled the Lineage 1000, a corporate-barge version of its E-190 large regional jet. The following year, it announced plans to produce a pair of midsize jets it would later call the Legacy 450 and 500. A year after that, it broke ground on a massive aircraft assembly, design, engineering, delivery, and customer center in Melbourne that has been built out in stages and employs over 600. And this past September, it opened an aircraft-seating plant up the road in Titusville. All the while, it updated its offerings, ensuring they didn’t get stale stylistically or technologically, and it periodically added performance improvements. All of its aircraft are designed to operate 1,200 to 2,000 hours per year, four to six times more than the average business jet.

By 2013, Embraer had $1.62 billion in new-jet sales, virtually tied with Textron Aviation’s Cessna, at $1.64 billion. For three years, its Phenom 300 has been the world’s best-selling bizjet, with 54% market share in its segment. This year, Embraer eclipsed Gulfstream as the top-rated corporate jet for product support in a long-running, industry-leading survey. By any objective measure, Embraer’s march into the arena has been nothing short of stunning, and even more so when you consider that it did so largely in a down market. Since 2008, the number of new corporate-jet deliveries worldwide has been nearly halved, to a mere 718 last year. Staying afloat, not to mention succeeding, in such a river of carnage is no small task.

Embraer’s formula of offering more for less plays a big part in its success, but there is more to it than that. Key executives exude a passion. Jay Beever, the vice president of interior design, unusually immersed himself in computerized fly-by-wire flight-control systems, which are expensive controls generally found only in airliners and large corporate jets. In essence, the pilots’ control orders are converted into electrical inputs, routed into a flight computer, where they are subjected to “control laws” that ensure the aircraft keeps flying within its approved design limits, and then sent to the aircraft control surfaces—like the rudders and ailerons. This makes for smoother and more precise flying. Embraer’s Legacy 450 and 500 models are the first midsize aircraft to get full fly-by-wire controls manipulated by side-sticks. Beever understands that the technology provides a big leap forward in passenger comfort. “The cabin is actually where you feel it the most,” he says.

Marco Tulio Pellegrini isn’t your typical CEO, either. Every time an Embraer business jet is grounded for maintenance in mid-mission, a condition known as aircraft on ground, or AOG, he gets a text message. He also has a very large video screen in his office to track these events in real time: “It shows all of the AOGs, differentiated by colors. If more than two days, red; one to two days, yellow; and the others in green. I don’t want to see reds at all.” Pellegrini says he spends 30% to 35% of his time personally addressing AOGs, often picking up the phone and calling customers and responsible suppliers. “You cannot be superficial,” he says.

When a retired industry friend lamented there weren’t any “airplane guys” left in the business, I said, “We still have a few. They just speak Portuguese.”