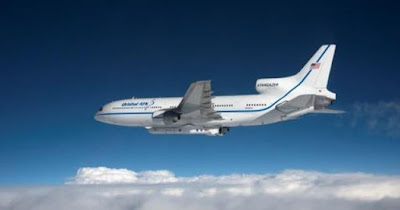 Sir Richard Branson wants to launch satellites from airplanes. But it's not exactly an original idea.

For years, Sir Richard Branson's Virgin Galactic has been trying to invent a better way to launch rockets into space. Instead of launching from Earth in a fiery blast and a cloud of dust, Virgin Galactic aims to carry a "SpaceShipTwo" spaceship into the stratosphere, strapped to the belly of a "WhiteKnightTwo" mothership -- then detach the former from the latter, and rocket to 62 miles above sea level.

If Branson can succeed in the endeavor, he'll build a space tourism business enabling well-heeled thrill-seekers able to afford the $250,000 ticket to enjoy several minutes of weightlessness on the edge of space.

But Orbital ATK can push them right past that edge, and actually into orbit.

Space tourism isn't Virgin Galactic's only business. "Leveraging" its work with SpaceShipTwo and WhiteKnightTwo, Virgin says it's also building a business to service the small satellites revolution. As the company explains on its website, it won't be long before Virgin can put satellites into orbit by air-launching them with a "LauncherOne" rocket carried by a Boeing 747-400 mothership.

But here's the thing: Orbital ATK is already doing that.

Been there, done that

Orbital is already an established provider of terrestrial launch services -- rockets blasting directly from Earth to space. But Orbital also does air launches. Last week, Orbital announced its latest launch of a small satellite into space from an airborne aircraft, a mission it has conducted successfully 29 times in a row since 1997. The 61-pound Cyclone Global Navigation Satellite System, or CYGNSS, satellite that it launched will be the first of an eight-satellite NASA constellation used to forecast the formation of tropical storms.

Orbital loaded CYGNSS aboard a Pegasus rocket, carried on the underbelly of a Lockheed Martin L-1011 aircraft -- one dubbed "Stargazer" by Orbital ATK. Then, at an altitude of 39,000 feet, Orbital detached the Pegasus, ignited its engine, and blasted it, and CYGNSS, into orbit.

Now here's where things get interesting from an investing perspective: Virgin Galactic has from time to time floated plans to IPO the company, following in the footsteps of Branson's Virgin America airline (which had its IPO in 2014, rocketed in value, and was ultimately acquired by Alaska Air). Presumably, Branson would prefer to notch a few successes with the company, though, before taking Virgin Galactic public.

Unfortunately, Virgin's space tourism business hit a rough patch when its SpaceShipTwo crashed during test flights in 2014, and it still hasn't fully recovered. But now, Virgin's LauncherOne business offers a second path to profits. Virgin is promising to offer launch prices as low as $10 million once it has the system up and running -- a mere fraction of the $50 million-plus that Orbital charges. That price point promises to win a lot of business from small-satellite operators -- and, potentially, to disrupt Orbital ATK's air-launched satellites business.

On the other hand, it took Orbital ATK several years to work out the kinks of air-launched rockets-to-orbit. In fact, in its early years, Pegasus experienced in excess of a 20% failure rate, losing multiple valuable payloads before figuring out how to make the process work. Assuming Virgin Galactic faces a similar learning curve, it could be some years before its business matures enough to reassure investors and support an IPO.