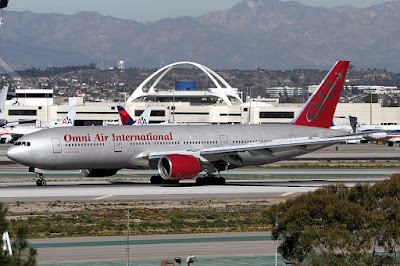 Omni Air International 777-222/ER (26935/88) N918AX is seen rolling out on Rwy 25L following its 13:37 pst arrival at Los Angeles International Airport (LAX/KLAX) on January 28, 2012. It is not immediately known who the aircraft was operating for, but it is thought that it may have been operating for Air Pacific which has had one of its 747-400s parked at the United Airlines maintenance facilities at LAX the past week.
(Photo by Michael Carter)
Posted by Michael Carter at 10:26 PM

Hi there. You are quite correct, the 777-200 was chartered by Fiji airline Air Pacific to operate a service to the national's capital, Nadi. It remained on the ground for about 18 hours for crew rest before returning to LAX on a somewhat delayed scheduled service.
Great shot by the way!

Funny. This is the first time I remember seeing a 777 operating for a "secondary" carrier. Just goes to show you that the type isn't that new anymore with the
17th anniversary of its entry into service coming up in June. Agree with the previous comment that it's a great shot !