Boeing marks milestone with production rate of 35 737NG's per month 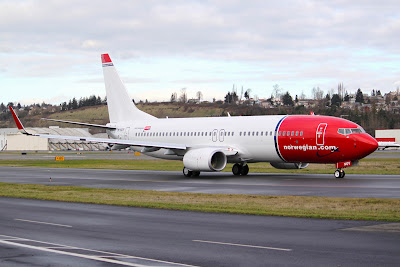 Norwegian Air Shuttle 737-8JP (39419/3878) LN-NOY (callsign: "Norshuttle 1") taxies at Boeing Field (BFI/KBFI) just prior to departuring on it's delivery flight on 01/10/2012.
(Photo by Joe G. Walker)
Boeing successfully achieved a production rate of 35 airplanes a month for the Next-Generation 737, with the delivery of the first airplane produced at the new rate to AWAS Aviation Services, Inc. Norwegian Air Shuttle will lease the airplane from AWAS. The 35th airplane to be built at the new rate is on schedule to roll out of the factory today which demonstrates that the production system has been operating successfully at a rate of 35 airplanes a month.
Employees will focus on stabilizing the production rate at 35 a month while investments are underway to go up in rate to 38 737s a month in second quarter 2013 and 42 a month in the first half of 2014.

Leaders of the 737 program acknowledged employees' contributions to achieving the record rate at an employee celebration at the Renton factory today. Employee teams implemented new lean improvements to create production capacity. "Working as a team, we have achieved production levels never previously reached," Beverly Wyse, vice president and general manager of the 737 program, told employees. "It's because of the focus and dedication of 737 employees that we've reduced waste in our production system and identified opportunities to further increase our productivity.

"The first airplane at the 35-a-month production pace rolled out of the factory the smoothest ever. Only eight jobs were completed outside of our production sequence out of thousands and we only experienced three part shortages during production," Wyse said.

The program also celebrated securing production of the 737 MAX at the Renton factory. "The capability of this team played heavily into the decision to keep the 737 MAX here in Renton," Wyse said. "With the years of dedication and experience our employees have, there's no one better at designing and building the 737."