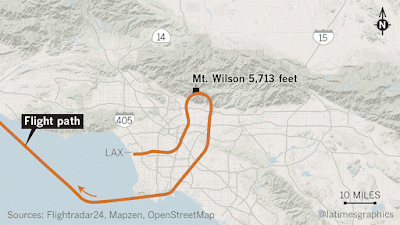 An air traffic controller in San Diego who mistakenly routed a wide-body jet with 353 people aboard toward Mt. Wilson has been removed from her current assignment amid an investigation into the incident, The Times has learned.

The wrong turn, which has sparked concern in aviation circles, occurred in some of the busiest and most difficult to monitor airspace in the nation. On a typical day, more than 11,000 aircraft take to the skies in Southern California, most of them over the Los Angeles Basin. Los Angeles International alone handles 1,700 to 1,800 departures and arrivals daily.

In the past 30 years, the National Transportation Safety Board has blamed two major crashes in the region on air traffic control problems — the mid-air collision of a private plane and an Aeromexico jet over Cerritos in 1986 and another collision involving a SkyWest commuter plane and a USAir jetliner at LAX.

The controller has been given other duties and is no longer working air traffic after an EVA Air Boeing 777 that departed from Los Angeles International Airport last Friday morning was ordered to turn left to the north, sending the aircraft over the San Gabriel Mountains at low altitude.

The standard procedure for eastern departures from LAX is to make a right turn to the south shortly after takeoff and then head out over the ocean.

The EVA Air incident began about 1:30 a.m., when the controller ordered Flight 15 to turn left shortly after the pilot shifted air traffic control responsibilities from the LAX tower to approach control in San Diego, a common practice.

When the controller realized the EVA flight was turning in the wrong direction, Federal Aviation Administration officials said, she took immediate action to keep the aircraft safely separated from an Air Canada jet that had just departed LAX from the north runway complex.

Those planes remained the required distance from each another, which is 3 miles laterally and 1,000 feet vertically.

FAA officials said the controller then turned her attention to getting the EVA pilot to turn south and repeatedly ordered him to do so until he complied. At one point in the flight, the controller asked the pilot: “EVA 15 what are you doing? Turn southbound now,” according to a recording of radio transmissions.

The Taiwan-bound jetliner appeared to clear the 5,713-foot peak of Mt. Wilson by no more than 800 feet, according to website data cited by The Times. However, broadcast towers rise an additional 400 feet from the summit, potentially reducing the clearance.

FAA regulations require aircraft to be at least three miles away laterally or 2,000 feet vertically above obstacles such as mountains.

“No way they should have ended up where they were,” said Jon Russell, a commercial airline pilot and a regional safety coordinator for the Air Line Pilots Assn. “The pilots followed instructions from air traffic control and it led to other issues with traffic and terrain.”

Thomas Anthony, director of the Aviation Safety and Security Program at USC, said the incident raises several other important questions and issues, such as how close the Boeing 777 got to the mountains, the effort to separate the EVA and Air Canada flights and whether the air traffic controller might have been tired from working late-night shifts.

Ian Gregor, an FAA spokesman in Los Angeles, said the agency’s investigation will look into all aspects of the flight, including air traffic control, the actions of the pilots and the proximity of the EVA jet to Mt. Wilson before correcting its course.

Gregor described the incident as “highly unusual,” but declined to comment further, stating that a personnel matter was involved. A spokesperson for the National Air Traffic Controllers Assn. also declined to comment, citing the FAA investigation.

EVA officials have said the airline is cooperating with the FAA and that their plane was never too close to the mountains or other aircraft, such as the Air Canada flight.

Posted by Michael Carter at 9:03 AM