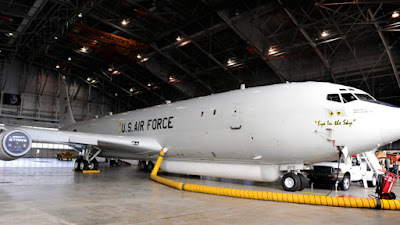 The Air Force has kicked off an open contest to build new radar planes capable of developing, detecting, locating and tracking moving targets on the ground.

The service on Wednesday released a development request for proposal, or RFP, for the Joint Surveillance and Target Attack Radar System (JSTARS) Recapitalization program, intended to replace the current Northrop Grumman-modified E-8C.

The award stipulates $6.9 billion for the engineering, manufacturing and development phase, the Air Force said in a release. The RFP includes all aspects of the system, including airframe, radar, communication systems, and battle management command and control.

The Air Force anticipates awarding the contract, including the first three JSTARS recap test aircraft, in 2018; it expects the first “assets” to reach initial operational capability “by the fourth quarter of fiscal year 2024, or earlier,” the release states.

The airborne command and control plane, a modified Boeing 707-300 series commercial airframe that can fly as high as 42,000 feet, is “extensively remanufactured and modified with the radar, communications, operations and control subsystems,” including a prominent 27-foot bathtub-like radome under the fuselage. The radome “houses the 24-foot long, side-looking phased array antenna,” according to the Air Force.

The service currently has 16 of the aircraft in inventory.

Each of the contractors is allowed to submit two proposals with Northrop-made and Raytheon-made radars, Defense News reported.

Congress handed down guidelines in the 2017 National Defense Authorization Act requiring the Air Force to work only with a fixed-price contract — locking in a price and putting the company on the hook for cost overruns. Yet the NDAA also made a provision for the defense secretary “to waive this limitation if the Secretary determines such a waiver is in the national security interests,” the release states.

“We realize intelligence, surveillance and reconnaissance is currently a combatant commander top priority. Given the language in this year’s defense policy bill, we took additional time before releasing the JSTARS request for proposal,” Air Force Secretary Deborah James said in a statement Wednesday.

“With the support of the Department on the importance of JSTARS to national security, we are moving out to deliver this critical ISR capability. We will continually look for ways to speed up the process towards initial operational capability,” she said.

The waiver allows the Air Force to work with both a fixed-price and cost-plus estimate contract strategy, Defense News said.

Schmitt, chronicling his flight aboard a JSTARS over Iraq as Army and Air Force crews watched movements by Islamic State militants, said, “[The] rotation of aircraft and surveillance crews can monitor a particular area for days, weeks or months, watching Islamic State activity to understand what the military calls the enemy’s ‘pattern of life.’ “

Unlike MQ-1 Predator or MQ-9 Reaper drones, electronic attack aircraft such as the EC-130H Compass Call, and reconnaissance aircraft such as RC-135 Rivet Joint and JSTARS “suck up some enemy communications, jam others and help paint a picture of the Islamic State on the ground for American fighters and bombers to attack,” Schmitt said.