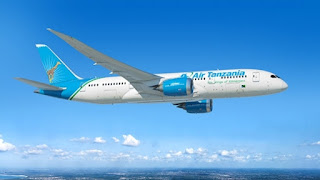 Dar-es-Salaam-based Air Tanzania has been revealed as the previously unidentified customer for a single Boeing 787-8, valued at $224.6 million at list prices.

This marks the latest in a series of aircraft acquisitions for the airline, building on the Tanzanian Government Flight Agency’s recent firm purchase agreements for two Bombardier CSeries 300s and one Q400 announced Dec. 2.

Discover how to book free flights by Travel Hacking.