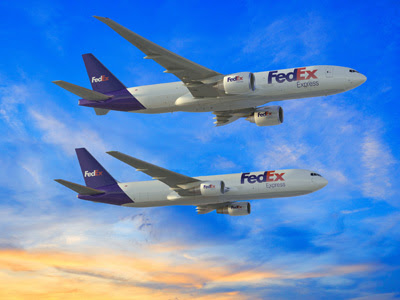 Image by Boeing
FedEx revealed Thursday it has placed a firm order for 27 Boeing 767-300 freighters valued at $4.74 billion at list prices, but also has deferred delivery of 11 777Fs. The disclosures were made as the Memphis-based express delivery operator reported a 76% year-over-year lift in net income for its fiscal second quarter ended Nov. 30 to $497 million on a 10% rise in revenue to $10.59 billion.

FedEx will take delivery of three 767-300Fs in its fiscal year starting June 1, 2013, and receive six per year over the following four years. The aircraft will replace the cargo carrier's aging MD-10Fs.

"The 767s will provide similar capacity as the MD-10s, with improved reliability, an approximate 30% increase in fuel efficiency and a minimum of a 20% reduction in unit operating costs," FedEx said in a statement.

It selected GE Aviation's CF6-80C2 engines to power the 27 767-300Fs. It also signed a multiyear OnPoint maintenance, repair and overhaul agreement with GE.

Regarding the 777Fs, FedEx exercised two options but also has delayed the delivery of 11. Two will be deferred that had been scheduled for delivery in the fiscal year starting June 1, 2012, five from the next fiscal year, and one per year in the following four years. FedEx said the deferrals were necessary "to better balance air network capacity to demand." It did not say when the deferred aircraft will be delivered.

As a result of the deferrals, FedEx will place four 777Fs into service in the fiscal year starting June 1, 2012, and two in the following fiscal year. It has 17 777Fs in service.

Executive VP and CFO Alan Graf said the 777F deferrals are a continuation of FedEx's recent efforts "to adjust its network, particularly in Asia, as recent inventory destocking trends have impacted demand." He said the delayed deliveries will enable FedEx "to make appropriately timed international 777 capacity additions over the next decade."


(Aaron Karp - ATWOnline News)﻿
Posted by Michael Carter at 6:57 AM