Singapore Airlines announces A380 service to LAX to commence next year 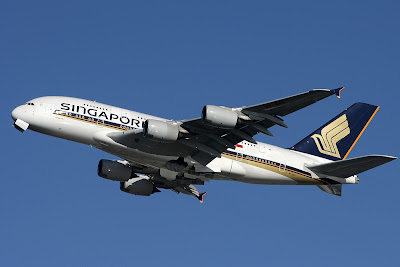 Singapore Airlines said on Monday it will deploy the Airbus A380 superjumbo on the Singapore-Los Angeles route beginning next year despite a controversy over the plane's engines.

Recent problems involving the Rolls-Royce engines on the biggest passenger carrier in the world have forced Australian airline Qantas to ground some of its A380 aircraft, preventing it serving the Sydney-Los Angeles route for the time being.

Both SIA, which currently operates 11 A380s and has another 9 on order, and Qantas are using Rolls-Royce Trent 900 engines on their A380s. SIA currently does not use the A380 on the Singapore-Los Angeles route.

"This is a significant and smart move by the carrier (SIA), which will likely capitalize on the busy trans-Pacific route with its 471-seater A380," said Shukor Yusof, analyst at Standard & Poor's.

"This means that while there will be capacity growth, it will be incremental and sustainable for the airline," SIA said in a statement, adding that the route would start after the carrier receives its 12th A380 next year.

Posted by Michael Carter at 6:57 PM

I just saw the A380 (singapore) fly by over my apt in LA. It was coming in to land, first time I saw the A380 flying by. It was passing by around 5pm today (Feb 27). Do you know what flight # it is, or where it was coming from? I tried LiveAtc.net but I think I missed the clearance.
Thanks!