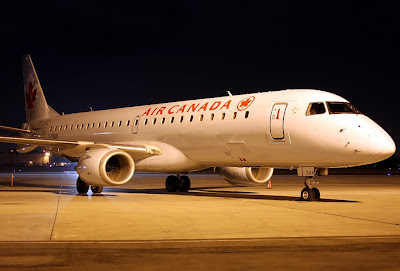 Air Canada ERJ-190-100IGW (190AR) C-FNAW (19000149) rests on the ramp following it's arrival on April 6.
(Photo by Michael Carter)
Air Canada brought an Embraer ERJ-190 to Orange County on the evening of April 6. The aircraft is in Orange County to perform 5 noise test flights on April 7 to qualify the aircraft to operate at the airport. The carrier plans to use the ERJ-190 on flights between Vancover, British Columbia and Orange County. A319-114 C-GAQZ (740) performed 5 noise qualifing flights last July 22 as the carrier plans use this aircraft type on flights between Toronto and Orange County. No start up dates have been announced but reports indicate that the carrier would like to begin operations at SNA as soon as possible.
Posted by Michael Carter at 1:04 PM