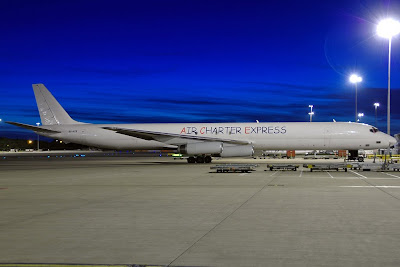 The aircraft was originally delivered to Eastern Airlines as N8755 on 12/14/1969. The aircraft was sold to SAS on 02/22/1974 and served the carrier as OY-KTH and LN-MOF as "Blue Viking" it also served with Scanair as "Thyra Viking." During it's years with SAS the aircraft was sub-leased to IcelandAir and Air Algerie.

In mid-1989 the aircraft was sold and converted to a DC-8-63(F) and re-registered as N793AL serving with Challenge Air Cargo. It also saw service with Arrow Air and Air Tansport International (ATI) before being bought by Airborne Express in April 1993 and re-registered N815AX.

This lovely aircraft is seen at Manchester Ringway International Airport (EGCC) on August 24th, 2008 resting before it's next flight. (Photo Courtesy of Nik French / 360 Spotter)
Posted by Michael Carter at 8:45 PM