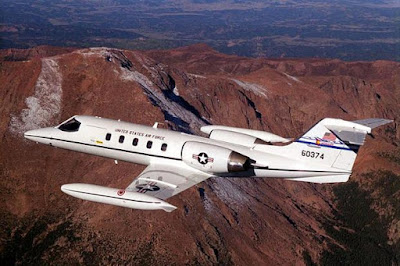 Colorado's tiniest Air Force squadron is in the middle of a massive fight, with Pentagon brass and a local congressman battling over whether it will be shut down.

With just two planes and 17 pilots, the pint-sized 200th Airlift Squadron at Peterson Air Force Base has flown under the radar for years.

But, in a $10 million cost-cutting move that blindsided lawmakers, Air Force Secretary Heather Wilson wants it gone by June.

"It's not supposed to work that way," said Colorado Springs Republican U.S. Rep. Doug Lamborn as he visited the unit last week.

At the center of the fight are the squadron's aircraft -- two Lear jets suitable for whisking executives around the planet at speed and in comfort. They are some of the last Lears left out of a fleet that was supposed to be retired six years ago.

And as handy rides for local generals, they are something that makes brass outside Colorado Springs Marine green with jealousy.

The squadron, staffed by Colorado National Guard airmen, is struggling ahead of the shutdown.

The unit's commander, Lt. Col. Derek Tate, said his troops are scrambling to find jobs and care for their families.

"A lot of them changed their lives to move here to join this squadron," he said.

Lamborn said the Air Force, which normally briefs Congress on its plans, was secretive about the 200th's closure. He objected to that and sought to deter the shutdown.

In a letter to Lamborn, the Air Force's Wilson said the service will help the squadron's troops with transitions. Among the possibilities, she said, is for airmen to move to the Guard's 140th Fighter Wing in Aurora, where they could fly F-16 Fighting Falcons.

The problem is the Lear is to the F-16 as a limousine is to Formula 1 racing.

Purchased in the 1980s at the height of the Cold War, the Lears allowed top military leaders to travel through their areas of command. Twin-engined with a 40-foot wingspan, the planes can land in remote airfields and can be readied for missions in minutes, making them one of the most nimble airlift assets in the military.

Even as Lears were pulled from Europe and the Pacific, the military left the 200th at Peterson to meet the high demand for "DV" aircraft here. DVs are "distinguished visitors" in military speak -- four-star generals, undersecretaries and Cabinet members, and top White House officials.

With five military bases here, Colorado Springs draws DVs like it attracts miller moths in the spring. The only military base that garners more of them is Andrews Air Force Base, the Pentagon's private airport.

As the only unit west of the Mississippi designed to fly DVs, the 200th stays busy. And it's not just hauling the high-ranking and the powerful. The unit's Lears are also used to fly classified cargo around the region -- including nuclear missile parts.

The Lear is also a great target -- U.S. Northern Command in Colorado Springs has frequently used them to simulate hijacked jetliners as fighter crews train to stop another 9/11-style attack.

"We are uniquely suited with our geographic location," Tate said.

All of that isn't enough of save the 200th. In memos, the Pentagon says it has other planes that can be radar targets, fly the brass and haul sensitive cargo.

Lamborn hopes one factor could save the squadron: pilots.

For the past year, the Air Force has bemoaned its lack of pilots to Congress. It got authority to give big bonuses to keep flight crews in uniform and is even offering to bring retirees back on active duty to cover the shortfall, estimated at more than 1,500 pilots in the coming years.

Lamborn said shuttering the Colorado Springs squadron will put its 17 pilots out of uniform.

"It's penny-wise and pound foolish," he said.

In addition to efforts to save the unit outright, other options, including turning the squadron into an outfit that trains Air Force Academy cadets, are being explored.

So far, the Air Force has shown no interest in saving the 200th.

Maj. Josh Villalobos said his family is fretting the change, which will put him out of a job.

Lt. Col. Derek Rhinesmith said while the unit still has four months left, the looming shutdown is taking a toll.

"We have already lost some of our pilots to the airlines," he said.

Lamborn still hopes to reason with the Pentagon and save the squadron.

"They are making a mistake," he said.

In an email to the Gazette, Colorado National Guard boss Maj. Gen. Michael Loh questioned whether the Air Force would save any money by shutting the unit down. Pulling the planes out of Colorado Springs means other planes will have to fill in.

"The 200th is the most efficient and effective operational support airlift squadron in the Air Force, delivering great results proven by the fact that the 200th has won the Joint Operational Support Airlift Center small unit award seven years in a row," he wrote.

Loh has talked with Air Force brass about options for saving the squadron.

"So far we haven't heard if any of those would be acceptable to the Air Force and we await a response," he wrote.