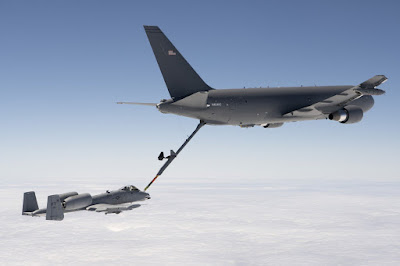 The first operational KC-46A Pegasus — the tanker being designed by Boeing to replace the aging KC-135 — took its maiden flight on December 5.

That flight came after numerous delays and cost overruns that have stymied the tanker's development over the past several years. Even though it got off the ground in December, Boeing admitted at the time that it would miss a self-imposed deadline to give the Air Force the first operational KC-46 by the end of 2017.

Now the Air Force expects to receive the first operational KC-46 by spring 2018, and Boeing is obligated to deliver 18 of the new tankers by October. But major defects remain unresolved, according to Aviation Week.

The most worrying deficiency is the tendency of the tanker's boom — where the fuel flows — to scrape the surface of the aircraft receiving fuel.

The problem could endanger the aircrews involved and risks compromising the low-observable coating on stealth aircraft like the F-22 and F-35 fighters. A KC-46 with a refueling boom contaminated by stealth coating may also have to be grounded.

Representatives from the Air Force and from Boeing told Aviation Week that they are working on the problem, with personnel from the government and industry reviewing flight data to assess such incidents and compare them to international norms.

Their assessments will help decide whether changes are to be made to the camera used for refueling on the KC-46. The Pegasus' boom operator sits at the front of the aircraft while directing the boom, relying heavily on the camera. Older tankers have the boom operator stationed at the back of the plane to guide the boom in person. A decision on the camera is expected by March.

A Boeing spokesman said similar contact between the boom and the receiving aircraft happens with the Air Force's current tankers as well.

A Boeing spokesman also told Aviation Week in December that an issue with the KC-46's high-frequency radio had been resolved, but an Air Force spokeswoman said the force was still working on it, expecting to have options to address it by January.

The radios use the aircraft's frame as an antenna, which sometimes creates electrical sparks. The Air Force wants to ensure they can never broadcast during refueling in order to avoid fires.

Issues with uncommanded boom extensions when the refueling boom disconnects from the receiving aircraft with fuel flowing have been reduced to a Category Two deficiency, an Air Force spokeswoman told Aviation Week. The solution to that problem is expected to be implemented in May, the spokeswoman said.

Air Force Gen. Carlton Everhart, chief of Air Mobility Command, told Air Force Times that once testing is finished and the new tankers start to be delivered, he expects "they’re going to clear out pretty quick" to Air Force bases.

Boeing won the contract to develop the new tanker in 2011, and the Air Force expects to buy 179 KC-46s under the $44.5 billion program. Under the contract, Boeing is responsible for costs beyond the Air Force's $4.82 billion commitment. As of late 2017, the defense contractor had eaten about $2.9 billion in pretax costs.

Despite his limited involvement in the Pentagon's weapons programs, Defense Secretary Jim Mattis issued a stark warning to acquisition officials in November, telling them he was "unwilling (totally)" to accept flawed KC-46 tankers.