Qantas has been identified as the most polluting airline to fly across the Pacific Ocean to North America.

A report by the International Council on Clean Transportation (ICCT) analyzed 20 carriers and concluded that the Australian airline was 64 percent less fuel efficient than the top performers, All Nippon Airways and Hainan. 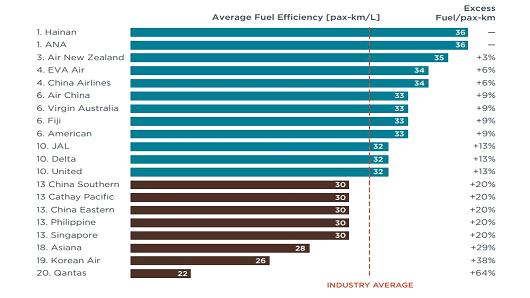 The report said Qantas recorded poor fuel efficiency because it used older, fuel-intensive aircraft, carried a low amount of freight (therefore making it less efficient) and also had relatively low numbers of passengers on each plane.

In a statement Tuesday, Qantas Head of Fuel and Environment Alan Milne said the airline ranked poorly because "we use larger aircraft, fly very long distances and have premium cabins that naturally have fewer people on board."

Milne added that the airline's Sydney to Dallas route, as one of the longest in the world, had a magnifying effect on emissions because at take-off there was so much fuel to carry

Qantas was the only airline in the list to have the Airbus A380 as its most prevalent aircraft on transpacific routes. The carrier said it is committed to lowering emissions and would soon be switching old 747's for Boeing's more fuel-efficient Dreamliner range.

It said Hainan relied on its modern fleet of Boeing 787 Dreamliner aircraft while ANA maintained efficiency by carrying more payload, especially freight. ICCT said almost half of the variance among the 20 airlines was due to the amount of freight being carried on each flight.

In 2015, the ICCT compared the efficiency of 20 major airlines operating in the transatlantic market. Using a slightly different methodology, that report found British Airways to be the most polluting airline crossing the Atlantic Ocean.