The Machete: The Super Plane That Could Replace the A-10 Warthog (Or Not)? 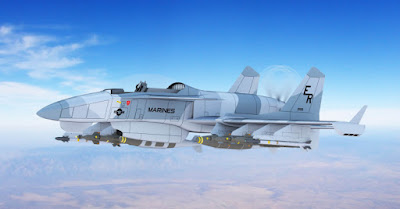 
Stavatti, the mercurial, Minnesota-based aerospace startup, has dusted off its old proposal for a new attack plane to partially replace the U.S. Air Force’s venerable A-10 Warthog.

The Machete, which is still just a concept, would come in two variants optimized for close air support — the propeller-driven SM-27 and the jet-propelled SM-28. Stavatti has proposed other variants of the Machete for air-to-air combat and advanced training.

The SM-27 and SM-28 are both single-engine, single-seat planes. They’re both armed with the same GAU-8 30-millimeter cannon that the A-10 also carries.

In proposing the Machete — actually, re-proposing it — Stavatti is hoping to benefit from the Air Force’s renewed interest in a light attack plane to complement the 1970s-vintage A-10. “Machete is a big project around here,” said Chris Beskar, Stavatti’s CEO.

Stavatti last marketed the Machete back in 2009, when the Air Force briefly considered acquiring around 100 light attack planes to replace A-10s on missions where the bigger, twin-engine Warthogs represented expensive overkill — such as striking lightly-armed insurgents in Iraq and Afghanistan. A turboprop attacker costs around $1,000 per flight hour to operate. An A-10 can cost more than $10,000 per flight hour.

Ultimately, the Air Force opted to buy just 20 A-29 Super Tucano light attack turboprops from Brazilian firm Embraer in order to donate them to the Afghan air force. The first A-29s arrived in Afghanistan in 2016 and promptly flew into action against the Taliban.

The USAF’s interest in light attack planes waned after 2009 amid Congressionally-mandated automatic budget cuts. The flying branch even tried to prematurely retire its roughly 300 remaining A-10s. Congress intervened more than once to preserve the Warthog force, and in February 2017 the Air Force relented and said it would delay any A-10 cuts until after 2021.

In 2016, service leaders — perhaps encouraged by the mid-2015 trial deployment of two modernized OV-10 Broncos to the Middle East — once again floated the idea of a new light attack plane. And with Pres. Donald Trump’s election in November 2016, the Air Force could realistically hope for a budget boost to actually pay for the light attackers.

The rumor is that the Air Force wants to buy around 20 “OA-X” light attack planes as early as 2017. The A-29 and Raytheon’s AT-6 are the clear frontrunners for that initial purchase. A later program, dubbed “A-X2,” would procure a larger number of more sophisticated attack planes.

Stavatti’s Machete exists only on paper and probably couldn’t fulfill the urgent OA-X requirement. But Beskar said he is optimistic that the plane could be contender for a broader acquisition of attack planes. He stressed the Machete design has matured over the years. “It’s basically doubled in weight” to 30,000 pounds, Beskar explained. That’s roughly the same weight as an A-10.

Beskar said Stavatti has revised the Machete design to include a new metal foam material that university scientists have recently developed in conjunction with the U.S. Department of Energy. The metal foam is lightweight and strong — and can stop a projectile in much less space than traditional armor can do.

Afsaneh Rabiei, an engineering professor at North Carolina State University, tested metal foam as a replacement for conventional body armor. “We could stop the bullet at a total thickness of less than an inch, while the indentation on the back was less than eight millimeters,” Rabiei said. “To put that in context, the [National Institute of Justice] standard allows up to 44 millimeters indentation in the back of an armor.”

The Air Force will propose its 2018 budget sometime in the spring of 2017. That budget could include the first substantial funding for a new light attack plane for U.S. forces. Whether Stavatti’s unbuilt, unflown Machete stands any chance of meeting the requirement remains to be seen — and likely depends on the Air Force’s willingness to take a chance on an unproven design from a small company.

Posted by Michael Carter at 7:06 PM