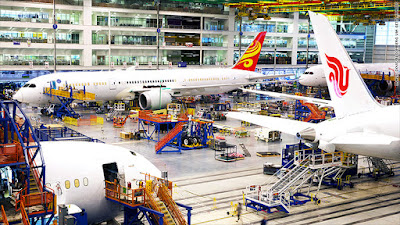 One of the most important union votes in decades is set to take place Wednesday at the Boeing plant in South Carolina.

A win for the Machinists union, which wants to represent nearly 3,000 workers at the new plant, would be a rare victory for labor in the South. Manufacturers have been drawn to the region because unions are much less common there than in the North.

That's why Boeing spent billions to open its newest plant in North Charleston. Its aim was to have a non-union facility.

The plant will get additional attention this week. President Donald Trump plans to visit the plant on Friday, White House spokesman Sean Spicer said Tuesday. Trump has clashed with Boeing on the cost of the new Air Force One. And his criticism of the Iran nuclear deal has placed an $8 billion sale of Boeing jets to Iran Air at risk.

But the Machinists, which represents most of the factory workers at Boeing, won the right to have a vote to unionize the South Carolina facility.

A win would give the union even more leverage over Boeing in talks, preventing it from continuing production of its 787 Dreamliner jet during a strike at unionized plants.

A union loss would further encourage other manufacturers to open union-free plants in the South.

A union win Wednesday "won't be a turnaround for their labor movement. But it'd be a major step forward," said Gary Chaison, professor of industrial relations and labor historian at Clark University. "Just having enough support to hold an election is a very big deal. I think most of the workers at the Boeing plant had a predisposition to vote against the union."

But Chaison said it's still an uphill fight -- about 40% to 50% of organizing votes fail, he said.

South Carolina has the lowest share of unionized workers of any state -- less than 2%.

When Boeing moved to open the South Carolina plant, the company said it wanted to assure customers of the 787 Dreamliner, which is built there, that strikes wouldn't upset its production schedule.

he union filed an unfair labor practice, seeking to shut the plant before it even opened in 2011. The Obama administration's labor board sided with the union, arguing that Boeing was trying to punish workers for past strikes by opening a non-union plant in South Carolina instead of Washington. Before the labor board made a final decision, the union and Boeing reached a deal and the union dropped its complaint.

Now the fight is on again.

The South Carolina workers who want union representation say their unionized peers in Washington earn about $10 an hour more than they do. The top wage in Washington for the most common job category is $36 an hour, while it tops out at $22 an hour in South Carolina, according to Mike Evans, a union organizer.

"Do your children deserve as much as the children of Boeing children in Seattle?" said a union blog post to employees in South Carolina.

For its part, Boeing says pay scales are driven by wages in the local market, and that the South Carolina plant already pays better wages than a union-represented Boeing plant in Alabama. The company has warned workers they may be forced to go on strike against their wishes if the union comes in.

"The [Machinists union] has actively worked to prevent the success of Boeing South Carolina from the beginning of the operation here," the company said. "We have developed a culture of working together. This site doesn't have a union, and it doesn't need one."

Boeing has been cutting back on jobs -- employment in its commercial aircraft division is down about 8,000, or nearly 10%, in the last year. But many of those cuts have come from lines building narrow-body jets, not the 787.

The battle between Boeing and the union won't end with Wednesday's vote. If it loses, the union could try for another vote in a year. If it wins, it would then start trying to negotiate a contract with Boeing to cover the South Carolina workers. That would probably be a contentious process.