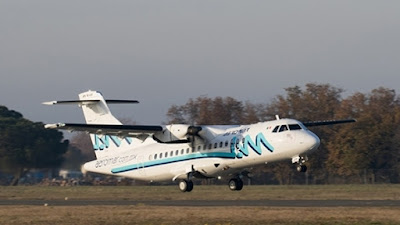 Mexican regional operator Aeromar will add two US destinations in the next six to eight months, CEO Andres Fabre said.

The Mexico City-based carrier already serves Tucson, Arizona, from Hermosillo, Mexico, and McAllen, Texas, from Mexico City. It sees potential to expand in the southern US, Fabre said at the Routes Americas conference. He declined to identify which cities those might be, other than to say the carrier is targeting “small to mid-size” cities in the Southwest.

The carrier will have 19 ATR turboprops by the end of the year, a mix of ATR-42s and ATR-72s. Aeromar is adding 40% more capacity this year, both through increasing the number of aircraft in its fleet and upgauging to the larger ATR-72s, Fabre said.

Some of this capacity will go to the US, Fabre said. The Texan cities of Houston, El Paso, San Antonio and Dallas are within the aircraft range from Mexico City.

“The commercial relationships between our countries are very important and will continue to grow,” Fabre said, batting aside concerns about increasingly heated political rhetoric on both sides of the border. “We do not believe [US] President [Donald] Trump’s plans for a border wall will affect travel between Mexico and the US, because people who fly need to have visas,” he said. “Besides, we will fly over any wall.”

Aeromar has nearly 8% of the slots at Mexico City’s international airport. Its network has been focused on connecting small and mid-size cities in the country with the capital. More than half its passengers are business travelers within Mexico, but US routes also have significant leisure and "visiting friends and relatives" traffic, Fabre said.

The US-Mexico Open Skies agreement has allowed Aeromar to consider new routes to the US, but the slot restrictions at Mexico City’s airport could prevent the airline from executing on those route plans. The carrier is betting on the new airport now under construction to allow airlines to take full advantage of the agreement.

“The new airport should be ready in a couple of years, Fabre said. “By that I mean, two, five or seven,” he said. If airport construction drags on, the carrier said it will order larger aircraft. “We will have to upgauge.”

Although Aeromar now operates only turboprops, Fabre said the carrier has not ruled out buying jet aircraft in the near future.

In 2016, South America’s Synergy Aerospace said it would invest up to $100 million in Aeromar. The carrier now is working with Synergy on details of the deal, Fabre said.