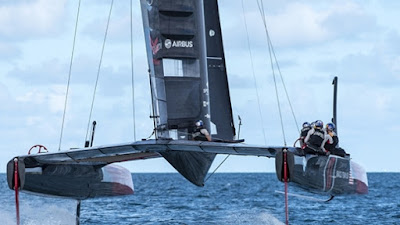 Airbus is working on a redesign of its A320 Sharklet wingtips as a result of developing a new design manufacturing process for the foil of a high-speed yacht competing in this year’s America’s Cup race.

As an industry partner, Airbus has provided about 30 engineers and specialist expertise in technologies that include hydraulic systems, control systems, 3D printing, yacht aerodynamics and micro-electro-mechanical systems (MEMS) sensors.

Yacht design for America’s Cup competitors has changed dramatically, with contenders now using advanced foiling yachts that fly on foils. Foils are like wings, lifting the hull out of the water to eliminate drag, making the yacht more efficient and faster.

That concept—of high-speed flying yachts—brought Airbus and the Oracle team together when they realized there was a convergence of technologies, Airbus head of business development Pierre-Marie Belleau explained at a media briefing in Bermuda Feb. 14.

Belleau said the yacht’s foils were one of its most important elements and were the equivalent of winglets, allowing the boat to fly above the water. “If you look at the foil, it looks like the Sharklet of an A320. The more we looked, the more we saw convergence,” he said.

“When the boat is flying, it takes all the weight of the boat so the mechanics need to be huge. The shape of the foil defines the boat speed.”

In a few short years, America’s Cup boats have gone from more traditional yacht design that sit in the water to advanced foil-design catamarans that fly above the water up to 90% of the time. By the time of the 2017 races, in Bermuda in June, the Oracle Team expects its yacht will be able to fly 100% of the time.

Belleau said Airbus developed a new design manufacturing process for the foil of the America’s Cup yacht. The aircraft manufacturer then realized it could take what it had learned from that design work and feed it back into an A320 Sharklet redesign. “That was not expected; it was the icing on the cake,” he noted.

Belleau said the Sharklet work would be a change in the manufacturing process and he was not sure of the timing.

Airbus will also incorporate new MEMS sensor technology into its A350 XWB widebody after lessons learned developing MEMS to understand precise data on the yacht’s wing and optimize performance.

Airbus also designed a boat version of its Iron Bird aircraft test bench, which was constructed by a sub-contractor in Bermuda and being used to test and improve energy consumption. The boat version has been nicknamed the Iron Shark.

Oracle Team USA performance director Ian “Fresh” Burns said it would not have been possible to bring about the new technology it has incorporated into the yacht on the scale it has without Airbus. “A lot of our fellow competitors have partnerships with auto companies and there are synergies with Formula One [racing], but they are small and focused, so it’s difficult to wrest a lot of technology out of that. The scale that we are working with Airbus trumps that,” Burns said.