The votes are in: Sun Country Airlines' new paint scheme is ...

Last week, Sun Country Airlines asked employees to vote on their preference for a new paint scheme that will eventually adorn the carrier’s airplanes. Now the results are in.

Sun Country employees picked the design labeled “Team A” in a “landslide” vote.

The company announced the winning design via social media, noting that it introduces new elements while keeping some older ones. The Minnesota-based carrier also noted that Lake Minnetonka – one of the Twin Cites' many lakes – served as inspiration for some of the new livery. 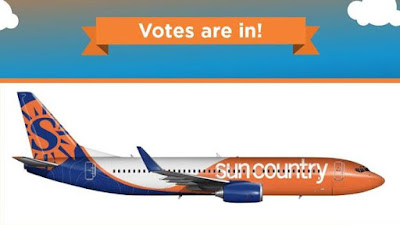 This is the new 'livery' that Sun Country employees voted to put on the carrier's aircraft.
(Photo: Sun Country Airlines)

“This livery reflects our brand in several ways. As you can see, the compass logo on the tail mirrors the tail of our current livery, keeping us connected with our wonderful passengers we’ve come to know throughout the years. Second, the introduction of Minnetonka’s depth chart as our new ‘lakes’ design element demonstrates our continued commitment to our home state and local customers. Lastly, the refreshed bold use of orange symbolizes our bold vision for a bright future serving leisure travelers ahead. See you in the skies!”

When the vote was first announced, Brian Davis – Sun Country’s Senior Vice President, Commercial – described it as a way to give employees a voice in Sun Country’s transformation from a traditional low-cost carrier into a more of a no-frills, budget-oriented outfit.

“It is important to me that as we build, we build together,” Davis said in a note to workers ahead of the vote. “It is imperative that we not only listen to the feedback of our customers, but also the expertise and input of our most valued asset – you!”

Sun Country says all new planes coming into its fleet will bear the new livery, including some new aircraft due to arrive by the end of the year. The airline also will update its existing fleet of about 20 aircraft, though planes will get the new scheme only when it’s time for their next regularly scheduled repaintings. Sun Country’s aircraft typically get repainted about once every seven years, though the schedule may vary by individual plane, according to spokeswoman Jessica Wheeler.

(Ben Mutzabaugh - Today In The Sky / USAToday)
Posted by Michael Carter at 11:16 PM