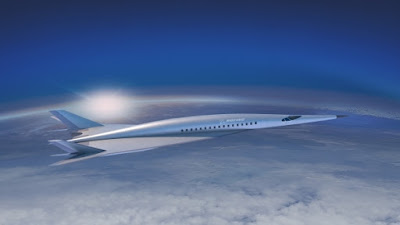 Boeing Commercial Airplanes has unveiled a concept vehicle for an airliner capable of crossing the Atlantic in two hours, or the Pacific in three.

Boeing has joined with hypersonic specialists at the company’s Research & Technology unit to study a Mach 5 vehicle, which was revealed June 26 at the American Institute of Aeronautics and Astronautics (AIAA) Aviation 2018 conference in Atlanta.

The concept is a preliminary step toward a long-range development plan targeted at both commercial and military applications. Although not yet defined, the concept is provisionally aimed at a passenger capacity larger than long-range business jets, but smaller than the Boeing 737, with potential entry into service from the late 2030s onward.

Flying at Mach 5, and with a projected cruise altitude of 95,000 ft., the vehicle would travel at more than 2.5 times the speed and 30,000 ft. higher than the supersonic Anglo-French Concorde, which was retired in 2003. According to Boeing, the additional speed would enable same-day return flights even across the Pacific and provide airlines with increased asset utilization.

Emerging from the same internal high-speed vehicle research studies that produced the hypersonic intelligence, surveillance, reconnaissance (ISR) and strike military concept unveiled early in 2018 at the AIAA SciTech conference in Florida, the civil design forms part of a broader Boeing program that might include the nearer-term development of a reusable hypersonic demonstrator. This vehicle, if sanctioned, would be used to prove a wide range of airframe, systems and propulsion technologies for multiple applications, and could be flown as early as 2023 or 2024, Boeing chief scientist for hypersonics Kevin Bowcutt said.

“You have to do these kinds of studies now to know where we have to push the technology and where we have to advance things,” Bowcutt said. “Technologically we could have an [operational military] hypersonic aircraft, such as an ISR, flying in 10 years. But there’s a lot that goes into a commercial airplane, including the market, regulatory and environmental requirements, so it will happen when there is a convergence of those things.”

The Boeing Research & Technology (BR&T) hypersonics group has studied the potential advantages of operating at significantly higher cruise speeds on today’s networks. “If you look at time differences and schedules, you can conceive of going back and forth in a day. It is also interesting from an airline business perspective, because now you can double the rate of income generation [as] you use the asset twice in a day instead of once or even less,” Bowcutt said.

“Our commercial airplane team has been working right alongside the BR&T team as this technology has evolved,” Boeing Commercial Airplane VP product strategy and future airplane development said. “We share our insight into the commercial market and where we see it going, as well as the requirements any commercial airplane would need to meet—ranging from passenger appeal to regulatory mandates.”

The combined team has “so far been looking at requirements and flight times,” Bowcutt said. “And we have some of their advanced concept folks working shoulder-to-shoulder with us. We are trying to get to a point where we have a concept in which we are comfortable with the way the design closes, and then we can start looking at the market and at things like sonic boom and takeoff noise.”

However, from a technological challenge perspective, it is speed that sets the research agenda. “To get from Mach 0.8 to Mach 5 is a sixfold [600%] increase in speed, but from Mach 5 to 6 is only a 20% increase. After Mach 5 you get diminishing returns and increasing costs, so what I am looking for are technical cliffs, or step changes. If you go much faster, eventually you are going to hit a step change in propulsion or materials,” Bowcutt explained.