Chinese carriers to start taking delivery of A350s in July 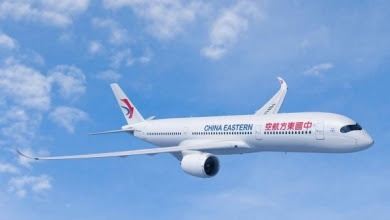 Rendering of Airbus A350-900 in China Eastern livery
(Airbus)

Several Chinese carriers, eager to launch international expansion plans, are scheduled to start taking delivery of new Airbus A350 aircraft in July, the first of the model to enter-into-service in mainland China.

Air China is expected to introduce its first A350 on the 19th or 20th of July, which will be deployed to operate on Beijing-Chengdu service initially and then will be used on the international routes. The Beijing-based carrier has ordered ten A350s.

Sichuan Airlines is also expected to take delivery of its first A350 in July. The Chengdu-based carrier signed leasing deals in 2016 to take three A350-900s from AerCap and one from Air Lease Corp and in February 2018 ordered 10 Airbus A350-900s.

Sichuan plans to use its A350 on a Chengdu-Boston route which is expected to launch in December with 2X-weekly flights. Other possible intercontinental routes Sichuan is considering for its incoming A350s include Chengdu-Copenhagen, Chengdu-Cairo and Chengdu-Tel Aviv.

Notably, the A350 is still waiting for the validation of type certificate from Civil Aviation Administration of China (CAAC); the aircraft is expected to secure clearance by Chinese authorities on July 1 at the earliest.