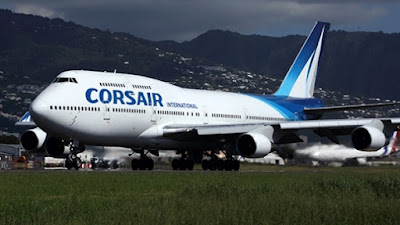 TUI Group is a travel and tourism company headquartered in Hannover, Germany.

However, the source told ATW that Cosair’s fleet and business model no longer fits in the TUI Group and that five of its airlines “operate a majority of harmonized Boeing aircraft fleets—for example, 737, 787s” while Corsair operates three aging Boeing 747-400s and four Airbus A330-200/300s.

Two years ago, TUI tried to sell Corsair to Canada-based Air Transat, “but unfortunately the deal was not successful,” the source said.

“We will keep all the AOCs [of its five remaining airlines], but the brands are all unified. Corsair operates to a lot of [French] overseas departments, a complete different business model that no longer fits in TUI’s core business,” the source said.

Corsair operates from Paris Orly to a variety of long-haul destinations across Africa, the Caribbean and Indian Ocean. The airline has around 1,200 employees and carries 1.2 million passengers per year.

This fall, Corsair teamed up with UK-based LCC easyJet and joined the new booking platform, Worldwide by easyJet.


(Kurt Hofmann - ATWOnline News)
Posted by Michael Carter at 7:17 AM