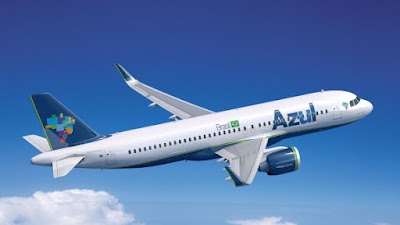 Azul Brazilian Airlines is in the process of transforming its fleet and extending its reach, adding Airbus A320neos while reducing the number of Embraer E-Jets and ATR turboprops, and credits the fleet transition for growing its revenue and driving third-quarter net income of R$204 million ($62.6 million).

That result was significantly widened from a net profit of R$9.4 million in the 2016 third quarter. Azul operated eight 174-seat A320neos by the end of the third quarter compared with none in the year-ago period. It also dropped four 106-118 seat E-Jets and six 70-seat ATRs compared to the 2016 September quarter.

“While growing our capacity by 13.3% year-over-year, we also increased unit revenue by 1.5% and grew our top line [revenue by] 15% in 3Q17,” Azul chairman David Neeleman stated in comments released with the carrier’s earnings. “This result was mostly driven by the addition of larger next generation aircraft to our fleet replacing smaller aircraft, combined with an increase in load factors.”

The carrier—which launched in 2008 as a Brazilian domestic market, regional aircraft-based business and as of 2014 still had a fleet comprised entirely of regional aircraft—will continue to expand its reach.

It will begin taking delivery of five A330neos starting in late 2018 and recently announced plans to launch new international routes: Belém-Fort Lauderdale, Florida; Belo Horizonte-Orlando, Florida; and Recife-Fort Lauderdale. “With the arrival of five state-of-the-art A330neos starting late next year, we will be able to keep expanding our international presence,” Azul stated.

Azul noted that it has launched a new feature in its app allowing “customers to engage in live chats with our crewmembers, the first in the Americas,” adding, “Given that most of our customers own smartphones it makes sense to offer them another efficient tool to communicate with us.”