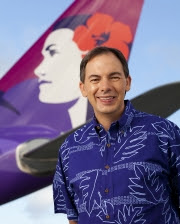 Hawaiian Airlines president and CEO Mark Dunkerley will retire and be replaced by EVP and CCO Peter Ingram, effective March 1, 2018, ending a 15-year run in which Dunkerley transformed the Honolulu-based carrier.

Dunkerley, born in England and educated in the US, joined Hawaiian as president and COO at the end of 2002 after having served as COO of Brussels-based Sabena Airlines. His first order of business was guiding the then-struggling Hawaiian through a Chapter 11 bankruptcy reorganization that lasted for more than two years.

As recently as 2010, Hawaiian flew almost entirely among the Hawaiian Islands and between Hawaii and the US west coast, operating a fleet of aging Boeing 767s on its US west coast routes.

It now flies to Tokyo, Osaka, Sapporo, Seoul, Beijing, Auckland, Sydney, Brisbane and New York JFK, among other destinations (Honolulu-JFK is the longest domestic flight in the US). Airbus A330s make up the backbone of its long-haul fleet, and it has just taken delivery of its first A321neo.

Since December 2002, when Dunkerley joined the carrier, Hawaiian has doubled annual passengers flown to 11 million.

“This has been a heart-wrenching decision,” Dunkerley said in a statement announcing his departure.

Ingram, a Canadian, came aboard as CFO in November 2005, shortly after the carrier’s emergence from Chapter 11, having just spent three years as American Eagle Airlines’ CFO.

“Peter Ingram has been an important part of Hawaiian Airlines’ growth and success for the past 12 years, and we are confident in his deep knowledge of the airline, the industry and the community,” Hawaiian board chairman Lawrence Hershfield said. Ingram became CCO in 2011, overseeing marketing, sales, revenue management, network planning, loyalty programs and cargo.

In a 2015 interview in Honolulu, Ingram told ATW that he and Dunkerley spent a lot of time during the previous decade defining the carrier for the investment community. “We are leisure-oriented, so managing our cost structure is important, but we provide amenities that you wouldn’t see on a low-cost carrier,” he said. “So we developed this term ‘destination carrier’ because what we’re about is serving Hawaii, serving all the travel needs of people visiting here, people coming from other places. And we’ve really turned that into a defining description of what we are as an airline that is distinct from those standard models that you see elsewhere.”