For a company like Boeing, President Donald Trump’s "America First" policies, which represent a sharp departure for the US, threaten the way the corporation does business.

It’s a flying symbol of an interconnected world economy, one with a network of global suppliers that would be hard to unravel with government policies, and a global group of customers waiting to buy the plans.

The Dreamliner is like the United Nations of planes:

Its wings and batteries come from Japan.

India is the source of its floor beams.

The front fuselage is made in the USA and Japan.

The center fuselage and horizontal stabilizers are from Italy.

The wing/body fairings, which cover gaps on the body, are from Canada.

The movable trailing edge of the wings are from Canada, except when they’re from the US or Australia. 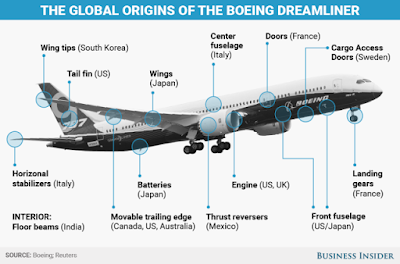 Its engines come from either General Electric in the US or Rolls-Royce in the UK.

After all that, the components travel around the world before arriving at one of Boeing's factories in Washington or South Carolina, where they’re assembled into finished planes. Then, they’re delivered to more than 60 airlines worldwide.

The Trump administration’s foreign policy and stances on trade and defense could have significant effects on how multinational companies do business. While a company such as Boeing supports a massive manufacturing presence in the US, it has cultivated a broad network of international partners that have invested decades and billions of dollars into relationships with Boeing.

These partners have deep ties to their local governments and business communities, but the new administration’s hardline stance on globalization threatens those bonds. And for Boeing, it could give its main rival, Airbus, a serious leg up.

NAFTA and the war on trade

As the Trump White House dials up the tough talk on trade, there are few companies as potentially affected by policies and changes as Boeing. This is especially true for the nondefense half of its business, Boeing Commercial Airplanes, which makes the Dreamliner.

First, take the North American Free Trade Agreement (NAFTA), that pact between the US, Canada, and Mexico that for more than two decades has created a free market in the region. While controversial leading up to its inception, the furor over NAFTA died down in recent years — until being reignited by Trump, who has vowed to renegotiate or even scrap the agreement.

Now with NAFTA's future in doubt, and Trump's plan to build a multibillion-dollar wall on the Mexican border — paid for with a 20% tax on Mexican imports — Boeing could suffer.

First, there are those thrust reversers built in Mexico; they would instantly become a lot more expensive.

There are customers at stake. Mexico's flag carrier, AeroMexico, flies an all-Boeing fleet, while its two local rivals, Interjet and Volaris, are loyal customers of Airbus, the European giant. If Mexico retaliates against US tariffs by instituting its own border tax for goods coming into the country, Boeing planes could become a lot more expensive and lead AeroMexico to choose Airbus over Boeing.

"A 20% tax on the planes is huge and basically makes any Boeing product uneconomical for Mexican customers." Vinay Bhaskara, a senior business analyst at Airways, told Business Insider. "Boeing either becomes unprofitable in that market or they simply can’t sell outside of the US."

For every Boeing plane, Airbus has an equivalent competitor. If you’re thinking about buying a Boeing 737, you’re also looking at the Airbus A320, for instance. They’re generally priced similarly too.

Boeing believes China could buy as much as $1 trillion worth of commercial airplanes over the next 20 years. There’s a lot of demand there for widebody jets like the 787 Dreamliner.

But Trump’s policies and rhetoric toward China could put that at risk.

Trump has accused China of playing games with its currency, to the detriment of US business. He’s openly challenged the One China Policy that's maintained the fragile peace between China and Taiwan. He’s criticized China for its artificial islands in the South China Sea. None of this pleases the people who hold the trillion-dollar market’s purse strings — the Chinese government and its massive state-owned airlines.

"China is easily the biggest area of concern for Boeing," Aboulafia said. "China is very big, and they account for 20% to 25% of Boeing’s output right now."

Two other countries planning to buy a lot of Boeing airplanes are Iran and Iraq. The Iraqi government has 18 Boeing 737-800s on order as well as 10 787-8 Dreamliners. In total, it’s worth about $3.7 billion.

Boeing is also trying to complete a deal with Iranian leaders for an 80-plane order. That could be worth $16 billion, though likely less at negotiated prices.

But now Trump is president.

His executive order, which temporarily bans immigration from seven majority-Muslim countries, includes Iran and Iraq, which responded with similar measures.

The Trump administration put Iran "on notice" after the country tested a ballistic missile, and relations between the nations, tenuous but improving since the nuclear deal, appear to be worsening.

As with with China, these deals are at risk if the Persian Gulf governments feel aggrieved by the new administration’s policies.
Made in America

Trump rode into office on a populist platform promising to reinvigorate American manufacturing. As a candidate and as president, he’s used his own bully pulpit, and Twitter account, to shame companies like Carrier that plan to move jobs to other countries.

But for Boeing, with that international supply chain, switching many of its internationally sourced components for aircraft such as the 787 to a new US supplier is "basically impossible," said Aboulafia.

That's because, unlike traditional supplier networks, many of Boeing's suppliers are full partners that have invested their own money in the development of the 787’s parts with the idea that they would make money off their investment throughout the life of the program. I think he thinks this is kind of like importing cement for casinos, where you can just switch your source for the cement.

"I think he thinks this is kind of like importing cement for casinos, where you can just switch your source for the cement," Aboulafia said. "Trump may have the idea that they can shift sources, but the airplane industry doesn’t work that way."

"Contracts tend to run the life of the program rather than we feel like buying from X one year and Y the next year," he added.

Take the Dreamliner’s Japanese-built wings as an example.

If Boeing were willing and able to disentangle itself from that complex international supplier relationship, Aboulafia said it would require reimbursing the Japanese and other companies that invested in the development and production of wings. Instead of being paid over the lifetime of the 787 program — about 30 years — Boeing would have to fully pay back the supplier to the tune of billions of dollars. Then Boeing would have to find an American company willing to invest in creating alternatives as there are no US companies producing equivalent parts.

A few weeks after Election Day, Trump sent a tweet that had a single target: Boeing.

"Boeing is building a brand new 747 Air Force One for future presidents, but costs are out of control, more than $4 billion. Cancel order!" Trump wrote.

Boeing, blindsided by the tweet, was forced to quickly issue a statement noting that it’s only "under contract" for $170 million to determine the capabilities of the new plane.

But the fact that companies can unexpectedly come into the president’s crosshairs, often with no warning, is the new reality for those doing business in the US.

And these tweets and statements can influence a company’s perception among the public — and apply pressure to change how they run their businesses.
Thanks, Trump?

That’s not to say that the new administration is all bad news for Boeing and other multinationals.

"Most of the good Trump can do for Boeing comes from what's generically good for corporate America," Bhaskara said.

The Trump administration plans cuts to corporate tax rates, and there’s talk of making it easier to repatriate the money that companies like Boeing earn abroad.

And the president could come to Boeing’s aid in its battle with Airbus, which has long enjoyed subsidies from European governments. Boeing contends that’s an unfair advantage, and the matter is being litigated at the World Trade Organization.

"If there are specific things Trump can achieve in terms of reducing European subsidies to Airbus, then I would think that helps Boeing compete a little bit," Simon Lester, a Cato Institute trade-policy analyst, told Business Insider.

It is customary for presidents to help push for sales of major US industrial products while on foreign visits. In fact, President Barack Obama once remarked that he deserved to a gold watch from the company because he's constantly selling Boeing products. If he so chooses, Trump, the consummate salesman, could be Boeing’s best marketing tool.

Get daily suggestions and methods for earning $1,000s per day ONLINE for FREE.
GET FREE INSTANT ACCESS