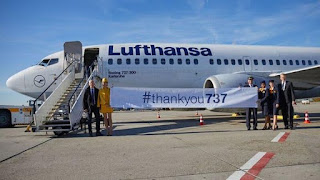 Lufthansa said goodbye to its fleet of Boeing 737 aircraft at a ceremony held in Hamburg.
(Photo: Lufthansa)


It served them well for 48 years but on Monday, at a ceremony held in Hamburg after special flight LH9922 arrived from Frankfurt, German carrier Lufthansa officially said goodbye to its fleet of Boeing 737 aircraft.

After the ceremony, the B737-300, with registration D-ABEC (“Karlsruhe”) flew back to Frankfurt.

Since taking delivery of the first Boeing 737-100 in 1968, Lufthansa has had a total of 148 B737s of various generations in its fleet. But the carrier says it will now offer continental service with a fleet of around 150 planes from the Airbus A320 family, including four new-generation A320neo aircraft.

"Lufthansa has always taken innovative approaches to cater customers’ needs and to take advantage of market opportunities, which is why we played a key role in the B737’s creation and development,” said Harry Hohmeister, a member of Lufthansa’s executive board and head of hub management, in a statement. “We will continue to pursue this innovative approach with the latest generation of aircraft."

Lufthansa ended its 737 flights with the start of the winter schedule and on Saturday, Oct. 29, the six remaining Boeing 727-300s took their last commercial flights.

The planes will now head to Florida to be resold.

In saying goodbye to the B737, Lufthansa reviewed the aircraft’s role in the carrier’s history, noting that aviation fans and airline employees have long referred to the aircraft as “Bobby,” thanks to a 1960s children’s book that suggested the Boeing 707 was the new jet’s father and the B727 its mother.