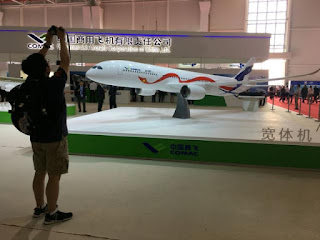 
China and Russia took a step closer on Wednesday to the joint development of a long-haul jet to challenge Boeing (BA.N) and Airbus (AIR.PA), displaying a model of the unnamed plane that would compete with Western rivals.

State-owned plane-makers Commercial Aircraft Corporation of China (COMAC) and United Aircraft Corp (UAC) of Russia said they had started the hunt to find suppliers, as they presented a mock-up of the wide-body jet at Airshow China.

Neither firm gave details on financing or technical specifications for what Western analysts call a politically-driven initiative that will be difficult to pull off and is likely to carry a high price tag.

China opened the show on Tuesday in the southern city of Zhuhai with a brief flypast of its J-20 stealth fighter, in a demonstration of military clout.

Both countries are currently developing smaller narrow-body jets to compete with the best-selling Airbus and Boeing types.

Guo Bozhi, general manager of COMAC's wide-body department, said a 50-50 joint venture based in Shanghai will start operations this year.

First announced in 2014, the project has so far been slow to materialize. The firms have said they want conduct a maiden flight in 2022 and begin deliveries in 2025 or later.

Western industry analysts consider the target challenging, but more realistic than recent aircraft programs that sought results in 5-7 years and came in late.

"A wide-body jet is an extremely complicated product, which will require a lot of skills (to develop) and require broad industrial knowledge," Guo told reporters. "China and Russia each have their own advantages."

Descriptions accompanying the model showed the firms ultimately envision three variants, based on a basic version that will seat 280 and have a range of up to 12,000 kilometers (7,500 miles).

The decision to base the venture in Shanghai was a "mutual decision", Guo said at the event, attended by COMAC Chairman Jin Zhuanglong, UAC's Chief Executive Yury Slyusar and Russia's Minister of Trade and Industry Denis Manturov. Guo declined to say how much each party had invested in the project.

A global effort to assess potential suppliers is now under way, said COMAC, which is separately pushing its own C919 narrow-body passenger jet towards a long-delayed maiden flight, now aimed for the end of 2016 or early 2017.

U.S. firms Honeywell (HON.N) and United Technologies Corporation (UTC.N) said on Wednesday they discussed the China-Russia jet with COMAC officials at the airshow, without commenting on the nature or subject of the contacts.

"We will choose suppliers who have rich experience in development, whose products are competitive globally, and who can continually guarantee quality from the development stage until the planes go into operation," Guo said.

A key decision will be what engines to use. Industry sources speculate the jet could use Western engines.

Another potentially tricky issue will be how the work should be divided, a subject which caused years of wrangling at Europe's Airbus, which began in 1970 as a consortium of nations and took more than two decades to make a significant impact.

Though a 50-50 JV, analysts view the Chinese side as being the more influential in the project.

The firm's Shanghai headquarters tells "where the balance of power is going to be and that reflects the size of the Chinese domestic market," said Sash Tusa, analyst at London-based consultancy Agency Partners.