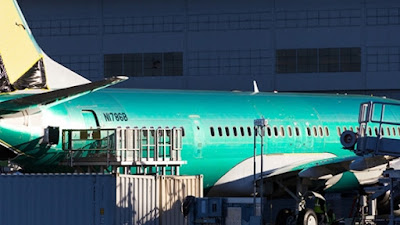 Boeing has rolled out the first high-density seating minor-model derivative of the 737 MAX 8-200 aircraft that is specially modified with an additional set of passenger cabin exit doors so it can seat up to 200.

The aircraft, which rolled out of the company’s Renton, Washington, facility in mid-November, is the first of 135 737 8-200s ordered by ultra-LCC Ryanair. The Irish-based airline, which originally launched the model as the MAX 200 with an order for 100 in 2014, subsequently exercised additional options to bring the total to 135. The airline also holds options for a further 75.

Seating 197 in Ryanair’s single-class configuration compared to 189 on the airline’s current 737-800 fleet, the derivative incorporates the mid-fuselage, extra-passenger exit door of the higher-capacity 215-seat Boeing 737 MAX 9 to satisfy regulatory safety emergency-evacuation requirements. The modification, which adds the extra doors at row 26, provides capacity for up to 11 more seats than the standard configuration of the Boeing 737-8. Additional cabin capacity is created primarily by removing elements of the aft galley and installing slimline seating.

Deliveries of the first aircraft are scheduled to begin during the second quarter of 2019 and run through to 2023. Boosted by the expanding fleet, Ryanair plans to grow from around 80 million passengers per year to more than 150 million passengers over the next decade.

The first 737-8 minor derivative emerges from the Renton production system at a challenging time for the program. Boeing, which successfully ramped up the production rate to 52 per month this summer is preparing to accelerate the rate to 57 per month next year as it continues to catch up after production issues that impacted deliveries earlier this year. On top of this, Boeing is readying for the start of initial deliveries of the 737 MAX 7 and is preparing to introduce the 737 MAX 10 test aircraft onto the production line.


(Guy Norris - ATWOnline News)
Posted by Michael Carter at 10:35 AM