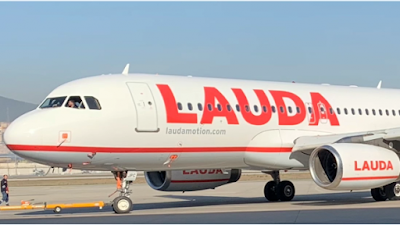 LaudaMotion has received the first of two Airbus A320s leased from SMBC Aviation Capital as part of the Ryanair subsidiary’s growth plans.

The Austria-based LCC took delivery of the first A320, a former Turkish Airlines aircraft, this week, with the second one set to arrive in January 2019.

Irish LCC Ryanair, which acquired a 75% stake in the airline founded by Formula 1 driver Niki Lauda, plans to grow the LaudaMotion fleet to 19 aircraft by summer 2019.

Ryanair CEO Michael O’Leary told ATW earlier this year the company must invest more money in LaudaMotion because the airline will lose approximately €150 million ($175 million) in its first “very difficult” year, up from a previous estimate of €100 million. The carrier should break even in 2019, however, and turn a profit in 2020, he said.

LaudaMotion and Lufthansa confirmed Oct. 9 that the companies have agreed that LaudaMotion will redeliver nine aircraft to Lufthansa between Dec. 31, 2018, and June 30, 2019, ending a leasing dispute that escalated in July.