Hawaiian Airlines announced an order for 10 Boeing 787-9 Dreamliners while canceling an existing order for six Airbus A330-800neos.
The Dreamliner was selected after an intense sales competition between Airbus and Boeing.

In an interview with Business Insider, Hawaiian Airlines CEO Peter Ingram explained why his company decided to abandon its long-standing Airbus order and go with Boeing.

On March 6, Hawaiian Airlines announced its decision to order 10 Boeing 787-9 Dreamliners with a list price of $2.82 billion. It was also the first major move the airline had made since Peter Ingram took over as president and CEO less than a week earlier. 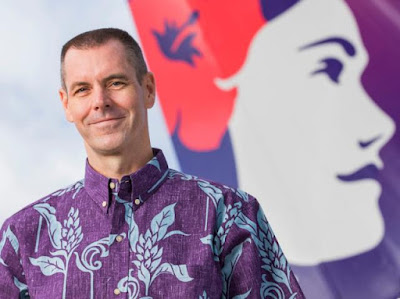 For Boeing, the announcement proved to be a double shot of good news.

At the same time as the Dreamliner announcement, Hawaiian also confirmed that it had canceled an order for six Airbus A330-800neos. It was the only six orders Airbus had for the aircraft type.

Hawaiian's decision to go with Boeing is the culmination of an intense and protracted sales competition between the 787-9 and the Airbus A330-900neo. As a result, Hawaiian is believed to have received a very substantial discount off the list price.

"Both airplanes are terrific and both had pros and cons," Ingram told Business Insider in a recent interview. "Ultimately, we came to a conclusion after a disciplined and detailed process that the 787-9 is the right airplane for us."

Hawaiian's decision to go with Boeing surprised some people. Over the past few years, Airbus had been on a roll with the Honolulu-based carrier. Hawaiian is replacing its Boeing 767-300s with smaller and much more efficient Airbus A321neos. More significantly, the airline's current flagship is its fleet of two dozen Airbus A330-200s.

Since the A330neo is simply an updated version of the A330 Hawaiian already has in service, it would make perfect sense to simply upgrade to the newer model of the plane it already has.

In fact, Ingram called the A330neo order "a natural extension" for the airline.

So how did Boeing manage to pull off the win?

The story goes all the way back to 2008, when Hawaiian placed an order with Airbus that included six next-generation A350-800 jets.

With room for about 280 people, the Dash 800 is the smallest member of the A350XWB family of carbon-composite wide-body jets. Even though the European airplane maker was able to find plenty of buyers for the plane, the company decided to effectively give up on it in favor of developing the A330neo. (Neo stands for new engine option.) The neo would also be available in two sizes: the smaller A330-800 and the larger A330-900.

However, Hawaiian proved to be the only airline to go with the A330-800, and that made Ingram and his team uncomfortable with the situation.

"Unfortunately, the A330-800 has not proved to be as popular in the marketplace," Ingram said. "But for us, it doesn't make sense to remain committed to an airplane that had the risk of not being sufficiently accepted in the marketplace in the future."

He continued: "So the lack of orders for the A330-800 opened us up to having a competition to look at the wide-body platform for us going into the decade."

The lack of industry acceptance creates all kinds of complications for airlines in terms of maintenance, service, and resale value.

Ingram went on to further explain his rationale. Even though Hawaiian purchases aircraft with plans to fly it for its entire service lift, the airline CEO also goes into it with the understanding that his company needs to remain nimble if the industry changes.

"From a risk management perspective, it's always prudent for us to consider what happens in the future if something affects the economics (of the business) and we need to make a change," he said. "The fact that there are no other customers for that particular variant at this time put us in the position where, if we continued with the order, we would have very few options if we need to make a change."

In short, Hawaiian didn't want to be stuck with a plane no one else wanted.


(Benjamin Zhang - Business Insider)
Posted by Michael Carter at 10:16 AM